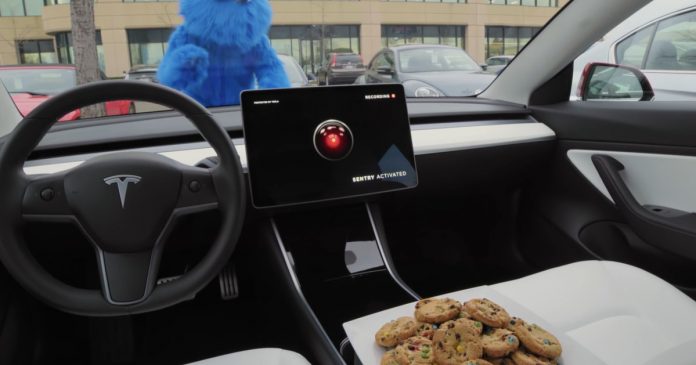 Tesla is revamping its “Sentry Mode” security camera feature in an upcoming software update, and perhaps the most notable change is that the company will no longer use the HAL 9000 graphic from 2001: A Space Odyssey when the mode is active, according to screenshots taken by some owners with early access. Instead, as Electrek points out, the cars’ dashboard screens will now show something that looks more like the central light on the turrets from Valve’s popular puzzle game Portal.

Originally rolled out in 2019, Sentry Mode takes the external cameras that help power Tesla’s Autopilot driver assistance system and turns them into one sort of all-seeing security camera. The screen flashes the HAL 9000 graphic to warn anyone with thoughts of doing damage or breaking in, and owners are constantly posting footage of people who ignore that warning. In a number of cases, Sentry Mode footage has led to fines and arrests.

And to bring it out of the comments, MGM has spoken and HAL9000 is forbidden (those pesky IP rights). There are new sentry mode icon and the full screen image. pic.twitter.com/ROJkNtLttt

The reason for the switch to the more Portal-styled graphic isn’t clear, and Tesla and MGM Studios did not immediately respond to a request for comment. It’s not out of the question that CEO Elon Musk and Tesla would have used the graphic (which is slightly different from the original HAL 9000) without clearing the rights; Tesla added Atari classic Pole Position to its in-car suite of games last year, but it ultimately had to remove it because the company “couldn’t resolve all the rights issues,” according to Musk. The company (and Musk himself) has also reproduced people’s art without permission in the past.

Beyond the graphic update, Tesla is finally making it possible for drivers to watch the footage that their cars capture during Sentry Mode or the regular dashcam mode. Previously, owners had to remove the USB drive that the footage was stored on and view it on a different device.

The Polygons of Another World: Atari Jaguar