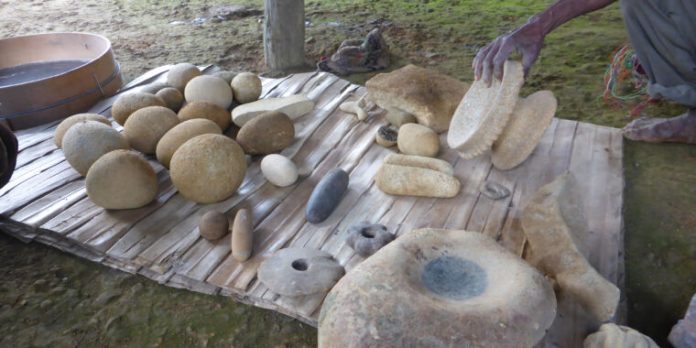 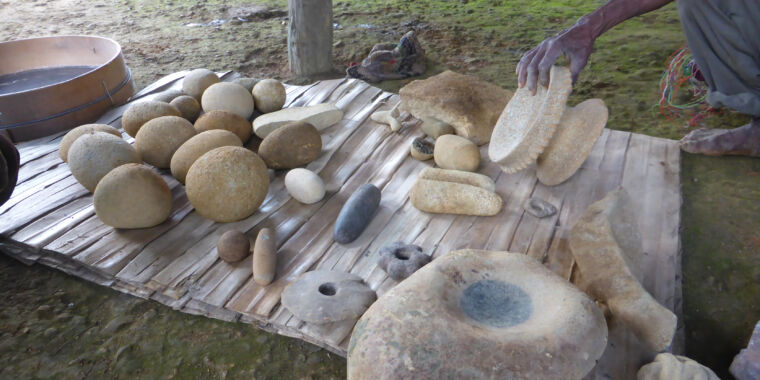 When people in New Guinea started tending crops like yam and fruits around 8,000 years ago, they transformed nearly everything about life on the island. By around 5,000 years ago, people had begun settling in houses supported by wooden posts. The farmers developed new kinds of cutting tools, and they carved stone pestles to prepare yams, fruits, and nuts. They also wove brightly colored fabrics with dyed fibers, elaborate carved stone figures of birds, and traded across 800km of ocean for obsidian.

The details of daily life were uniquely New Guinea. But the big picture—more people, settled village life, new types of stone tools, and a sudden flourishing of symbolic art—might have been familiar to people from other early agricultural societies around the world. Together, those things are a bundle of cultural trends that archaeologists call Neolithic.

Until recently, archaeologists didn’t think New Guinea had developed its own Neolithic culture. Instead, many researchers thought all the trappings of Neolithic village life had arrived around 3,200 years ago with the Lapita, a group of seafaring farmers who came to the island from Southeast Asia. That’s because the few Neolithic artifacts that could be properly dated all seemed to come from after the Lapita arrived. But the people of the small highland village of Waim recently rewrote that narrative with a chance discovery during a local construction project.

People have lived here for a long, long time

While cutting into a hillside for construction, local workers unearthed stone woodworking tools and stone carvings: a human head with a bird perched on top and a fragment of a face. Archaeological excavations at the site yielded a snapshot of ancient New Guinean life.

Microscopic traces of food—starches from yams, bananas, palm tree nuts, and sugar cane—still clung to the surfaces of stone pestles. Ochre still filled the groove worn into a stone where ancient crafters had once pulled string through the ochre to dye it; modern people living near Waim recognized the tool at once, because they still use something quite similar to dye the string for colorful woven bags called bilums.

The filled-in remains of five postholes marked where a house or other building once stood. A flat rock nearby, cutting horizontally into the clay slope of the hillside, may once have been a step. The site even recorded the ancient residents’ housekeeping techniques; bits of stone debris from tool-making had piled up downslope, as if someone tossed or swept them away from the house to clear away the mess after finishing a tool.

But one chunk of stone debris stood out from the rest: an obsidian core, with a chemical composition that traced it to the island of New Britain in the Bismarck Archipelago, about 800km away from New Guinea. It’s the oldest evidence of inter-island trade in raw materials discovered in the region.

A slice of prehistoric life

Similar axe-adzes and stone pestles had turned up at archaeological sites in the New Guinea highlands before, but they were usually scattered on the surface, with no way to tell how old they were. At Waim, University of New South Wales archaeologist Ben Shaw and his colleagues radiocarbon-dated 12 fragments of wood and charcoal from the same layer as the artifacts. The carvings, tools, pestles, and postholes turned out to be between 5,050 and 4,200 years old.

The stone carvings from Waim are now the oldest symbolic stone carvings from anywhere in Oceania, but very similar carvings of birds have turned up sticking out of the ground all over the highlands and northern lowlands of New Guinea. Shaw and his colleagues say the imagery was probably a part of shared culture that linked groups of people scattered around the region, even as groups began to grow more isolated and developed the 800 to 1,000 separate languages spoken in modern Papua New Guinea.

“[The carvings] may have been the formative stages of a clan system which we see in New Guinea today,” Shaw told Ars. “This would have transcended language and cultural boundaries.”

Like the carvings, the stone pestles at Waim are also the oldest examples ever found in Oceania. At earlier sites, archaeologists tend to find heavy, round stones that had been used to pound roots or nuts. Once people started taking time to shape and grind a proper pestle for that sort of work, it suggests that food processing had become a much more important, and probably more complicated, process.

And the starchy residues left behind on those pestles reveal a lot about what people ate and where it came from. The starches reveal a mixed diet of wild food, like palm tree nuts and domestic crops like bananas and yams. Yams tend to grow at low altitudes, so people probably grew and harvested them in the surrounding Jimi Valley lowlands, then carried them up to Waim, 1,980m above sea level.

The finds at Waim mean that the Lapita can’t claim credit for introducing technologies like axe-adzes, symbolic artwork, and defined domestic space to New Guinea. People on the island had been using them for at least 1,000 years when the Lapita arrived. But the Lapita still wrought drastic changes.

“The earliest pottery in New Guinea was introduced by Lapita, as well as animal domesticates (pigs, dogs, and chickens), which have become very important in New Guinea social exchanges over the past three millennia,” Shaw told Ars. Yams, taro, and bananas didn’t need pottery to cook them in, unlike the grain crops that fed early farming cultures elsewhere in the world, so people on New Guinea never bothered to invent it.

That’s not the only way in which New Guinea’s Neolithic probably looked quite different from Neolithic cultures elsewhere in the world. They farmed root and fruit crops instead of grains and didn’t domesticate animals until the Lapita showed up (to be fair, the only choices for domestication on New Guinea would have been birds and possums). But most notably, there’s no evidence yet that people settled in densely populated villages like Neolithic farmers in most of the rest of the world. People also seem to have stuck to hundreds of diverse cultural groups, each with its own language, instead of coalescing into a more centralized political system.

The difference, Shaw suggests, was cultural. “It just wasn’t part of the social structure,” he told Ars.

Archaeological evidence suggests that people in New Guinea first started raising yams and bananas as crops around 8,000 to 6,800 years ago. The earliest layers of buried artifacts at Waim date to 7,350 years ago, and they contain no trace of the Neolithic culture that appears later. But between 5,050 and 4,200 years ago, the wetland agriculture that produced the island’s most important crops got denser and more organized, and people’s way of life changed drastically. That leaves one big question: what took so long?

“Very rarely do we see independent cultural change occur suddenly unless it was a response to a volcanic eruption (for example) or incoming migration of people like the Lapita,” Shaw told Ars. “Only thousands of years later when [agriculture] has slowly been incorporated into people’s social system would large-scale changes be seen.”