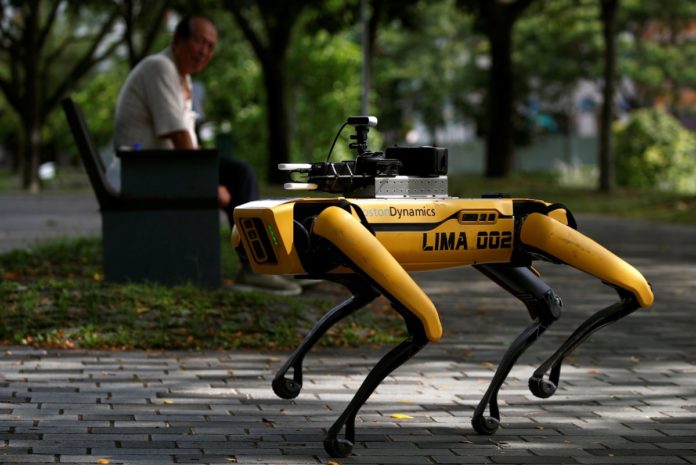 Urban residents going out for shopping or daily exercise often struggle to keep the recommended distance apart from others – prompting authorities and traders to come up with some novel ways of enforcing the coronavirus lockdown guidance.

Here are eight unusual methods being used around the world:

* Singapore has enlisted a robot dog to remind people to keep their distance. The remote-controlled machine, named SPOT, politely asks passers-by in English to stay at least one metre (3 ft) apart, in line with the city-state’s lockdown rules.

* Panda toys are being brought in as dining companions at a restaurant in Thai capital Bangkok, aiming to enforce social distancing by filling seats while also helping to ensure customers don’t feel lonely.

* A German café handed out hats made of swimming pool noodle floats as a light-hearted stunt reminding customers to keep their distance in the northern city of Schwerin.

* Residents of one district in the Indian state of Kerala have been told to carry open umbrellas whenever they are outside. “Two opened umbrellas, not touching each other, will ensure a minimum distance of one meter from one another,” said the state’s finance minister Thomas Isaac on Twitter.

* A wearable laser that beams a circle of light marking out the minimum safe distance was created by The Incredible Machine design studio in Rotterdam, The Netherlands, which shared instructions on how to build the device at home.

* Children are being taught distancing rules through a computer game where players battle to save lives by swerving others on a virtual street. A British professor behind the project was inspired by research showing games can influence real-life behaviour.

* Churches are embracing drive-in services to allow safely distanced worship in cities from the United States to South Korea, and the faithful were offered drive-thru confessions by a priest in Bowie city in the U.S. state of Maryland.

* Street artists are helping to spread distancing messages around the world, including a mural saying “Love is standing six feet apart” in the U.S. city of Santa Monica and an artwork of the cartoon characters Tom and Jerry in Rome in which a mask-wearing Jerry scolds Tom to stay back.