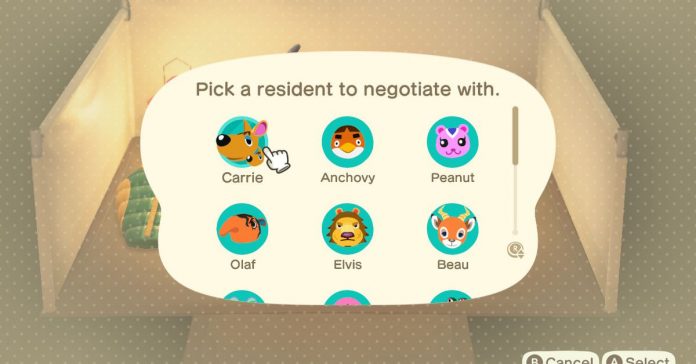 If you don’t like your Animal Crossing: New Horizons villagers and want to replace them, there’s one surefire way of doing it using amiibo cards.

If your town is full and you invite a villager to your campsite using amiibo cards, you can ask them to move in. Each day, the camper will request that you craft them an item. After crafting the item, you’ll be able to talk to them and ask them to move to your island. Based on our tests, as well as player reports we’ve received, the villager will decline the first two times. However, on the third time, they’ll say yes.

If you have space, they’ll move in the next day. If you don’t have space, they’ll talk about striking a deal with one of your current villagers. You can choose one of your villagers to move out in exchange for this new one moving in. We’re unsure if the villagers have the ability to decline. Based on our tests, they’ll accept the offer to move out with no trouble. The villager getting replaced will then instantly be packed up in boxes and the plot will be sold to the chosen camper the next day.

Don’t have an amiibo card?

Inviting a camper that came to your Campsite randomly, rather than from an amiibo card, will also replace one of your villagers. You may have to talk to them multiple times for the option to come up, though. The camper will randomly pick a villager to boot out, so this is riskier, as they might ask if they can replace a villager you like.

Based on our tests, you can reset the game when the camper asks if they can replace somebody in order to get them to ask for somebody else.

Adopting villagers who have been booted off of islands is not working correctly and it can potentially bug one of your housing plots. We don’t recommend using this method to adopt villagers from other towns until Nintendo fixes the issue.

Many players believe that ignoring your villagers or hitting them with bug nets will eventually prompt them to move off of your island, but nothing has ever confirmed this long-standing Animal Crossing rumor.

Some also believe complaining about the resident to Isabelle at Resident Services will also encourage them to leave, but this feature is used to reset their clothes or catchphrases, not for booting villagers. (Sometimes villagers moving in from other player’s towns might be wearing or saying something you don’t approve of, hence the feature.)

Zillow said Monday it will temporarily stop buying homes in all 24 markets where it operates in response to public health orders related to...
Read more

Tell HN: C Experts Panel – Ask us anything about C

Hi HN,We are members of the C Standard Committee and associated C experts, who have collaborated on a new book called Effective C, which was discussed recently here: https://news.ycombinator.com/item?id=22716068. After that thread, dang invited me to do an AMA and I invited my colleagues so we upgraded it to an AUA. Ask us about C…
Read more

How I Became a Better Programmer

Several people at React Conf asked me for advice on becoming a better programmer. For some reason, people see me as a pretty advanced programmer worth listening to. I thought it would be worthwhile to write down my "mental model" for how I have approached pro…
Read more