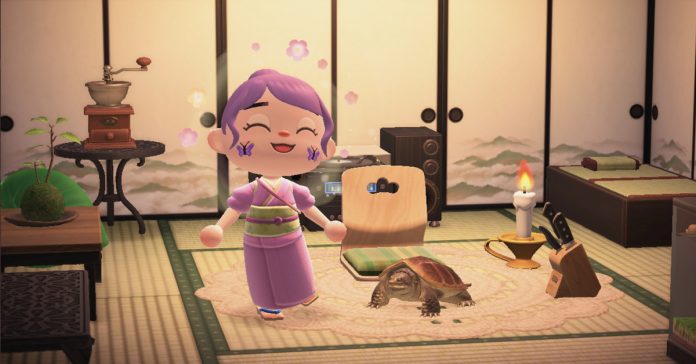 Friendship ended with all the other animals on my Animal Crossing: New Horizons island. (Sorry, Raymond.) The snapping turtle is my new best friend — or, at least, it will be when I catch one.

Animal Crossing: New Horizons lets you toss your bugs and fish on the ground — in crates and cages, which can be stacked and stored on your island. There is one exception, so far: the snapping turtle. No, it’s not that you can’t put it on the ground, but that it doesn’t have a crate or a cage. It’s just a turtle, on the floor, that opens it mouth and breathes heavily. It’s slightly creepy and I absolutely need a snapping turtle pal.

I’m already transitioning my turnip storage bathroom into my future snapping turtle’s bedroom. Lots of other Animal Crossing: New Horizons players are doing this, too. (Maybe not going as far as a snapping turtle bedroom — but some are!)

Apparently, the snapping turtle — I will name mine Larry — will just chill wherever you’ve placed it. When you get close (and push A) it’ll open its mouth and make the breathing sound. If you pick it up and show it off, it’ll wiggle a bit. It’s very cute and awkward. I love him.

Here’s another fun fact about the snapping turtle: It’s got a history with Blathers, too. If you choose to donate your snapping turtle to the museum (and how dare you) Blathers will tell you a story about a time he encountered one — and it chased him across a parking lot and he had to climb on top of a car to get away. (Never mind that Blathers is an owl and presumably can fly.)

Anyway, I’ve got to get back to renovating my house for my new best friend’s arrival. If you’ve got a spare dog bowl or litter box, let me know. (And at least now I know the litter box wasn’t for Rosie!)

Red Dead Redemption 2’s patch 1.19 has just dropped. Moments ago, Rockstar released update 1.19 for Red Dead Redemption 2 on all platforms. The patch is around 800MB in size, depending on your platform. The developer has yet to post any of the patch notes, …
Read more

Every upcoming phone available this spring and summer of 2020

Despite the current situation the world is dealing with, phone companies still plan to release new phones this starting this month and well into the summer. While some of us might be tightening the belt right about now, manufacturers like Apple and Samsung are at this very moment still building phones and they still want…
Read more