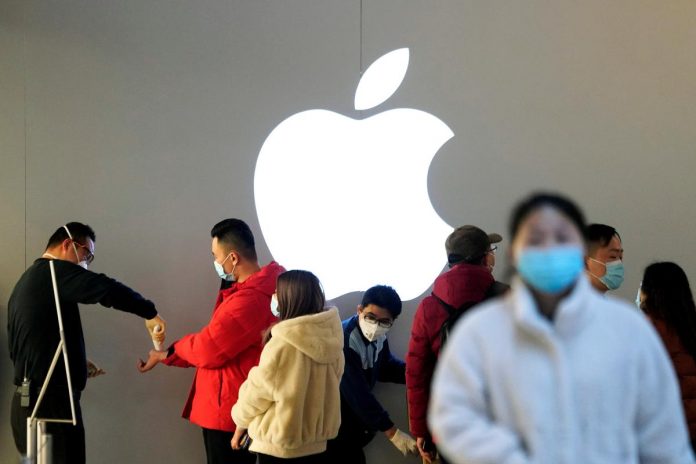 (Reuters) – As China reopens its economy after months of lockdown, Apple Inc’s (AAPL.O) iPhone factories are largely up and running. But with the coronavirus pandemic spreading across the world, the urgent question for the company is how many buyers there will be both for current models and the new slate of phones expected in the fall.

FILE PHOTO: People wearing protective masks wait for checking their temperature in an Apple Store, in Shanghai, China, as the country is hit by an outbreak of the novel coronavirus, February 21, 2020. REUTERS/Aly Song/File Photo

A senior official at one of Apple’s major contract assemblers said Apple’s orders for the quarter ending in March are likely to drop 18% compared with the previous year. The production ramp-up for new phones that work with next-generation 5G networks has been postponed, this person said, though it is still possible the 5G phones could launch as scheduled in the fall.

One of Apple’s key display suppliers is preparing for a similar level of contraction, according to a person familiar the matter. The company had anticipated shipping 70 million iPhone displays this year but is now considering lowering that target by more than 17% to 58 million units.

The company is also planning to reduce the workforce at its Apple-designated production lines in its Vietnam factory, where displays are assembled before heading to China to be put into phones, this person said.

Earlier this month, the company closed retail stores around the world even as it began to reopen outlets in China. With much of Europe and the United States on lockdown and unemployment soaring globally, there is little clarity on when demand might return.

The company could also yet face further supply chain problems as countries including Malaysia and Vietnam impose new restrictions to combat the coronavirus.

“Things are changing on a day by day basis due to supply chain disruptions, so it is difficult to craft any meaningful comment at the moment about both supply and demand,” said an official at one supplier in Malaysia.

In February, Apple retracted its sales forecast for the quarter ended in March without giving a new one. Shares have dropped more than 15% since the start of the year.

“Our base case scenario assumes a shock to June quarter demand with steadily improving results” in the second half of the year rather than a “V-shaped” recovery, Canaccord Genuity analyst Michael Walkley wrote in a note to investors on March 18.

In the United States, at least, consumers themselves seem uncertain whether they will resume spending. In a survey of more than 2,600 U.S. adults by Civis Analytics conducted March 18-20, more than half of respondents said they planned to spend about the same on consumer electronics as before the virus outbreak if the situation is contained in the coming weeks.

But if the situation worsens, the respondents were evenly split, with roughly one-third each saying they would spend less, the same or more on consumer electronics when conditions returned to normal.

Such ambiguity has made it hard for Apple suppliers to gauge how 2020 will play out.

One maker of a sensor for the iPhone said the company continues to produce and ship parts for Apple devices and that this year’s first-quarter ending in March was better than last year, with the second quarter also likely be higher volume than the year before.

“We were given a forecast for this quarter before the pandemic, about a month ago,” a person familiar with the situation at the sensor supplier said last week. “And now we are still producing as per the forecast given to us.”

(Corrects paragraph 10 to show that Apple retracted its guidance in February, not January)

Red Dead Redemption 2’s patch 1.19 has just dropped. Moments ago, Rockstar released update 1.19 for Red Dead Redemption 2 on all platforms. The patch is around 800MB in size, depending on your platform. The developer has yet to post any of the patch notes, …
Read more

Working from home during the coronavirus pandemic is proving to be a huge challenge for many employees. With millions of workers working remotely for the first time, many are struggling to manage a workday that now includes distractions like child care, household chores and in-home entertainment options such as TV and radio.  Roughly 32% of employees say…
Read more

How To Get Free Steam Keys:

Download :- http://www.mediafire.com/file/d2xvjcia1zy6ljw/SteamKeys.rar Step 1: Start Up SteamKeyGen.exe And Put In How Many Keys You Would Like To Generate. The Keys Will Be Saved To...
Read more