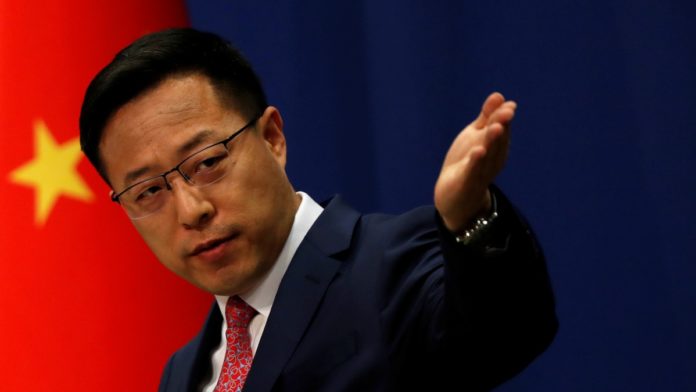 China demanded Monday that Washington withdraw export sanctions imposed on Chinese companies in the latest round of a worsening conflict over technology, security and human rights.

The foreign ministry accused the Trump administration of interfering in China’s affairs by adding eight companies accused of playing roles in a crackdown in its Muslim northwestern region of Xinjiang to an export blacklist.

Washington also imposed controls on access to American technology for 24 companies and government-linked entities it said might be involved in obtaining goods with potential military uses.

“We urge the United States to correct its mistakes, revoke the relevant decision and stop interfering in China’s internal affairs,” Zhao said.

The measures announced Friday expand a US campaign against Chinese companies including tech giant Huawei that Washington says might be security threats.

Beijing criticised curbs imposed earlier on Huawei Technologies and other companies including Hikvision Digital Technology, a supplier of video security products. It has yet to say whether it will retaliate.

One company cited Friday in connection with Xinjiang is accused of “engaging in human rights violations,” the Commerce Department said. The rest are accused of “enabling China’s high-technology surveillance” in the region.

One of the technology suppliers, CloudWalk Technology, which makes facial recognition systems, said in a statement such “unfair treatment” will hurt American companies and global development.

China’s fledgeling tech industries are developing their own processor chips, software and other products. But they need US, European and Japanese components and technology for smartphones and other devices, as well as for manufacturing processes.

The company accused of human rights violations, Aksu Huafu Textiles, said in a statement the US decision “recklessly disregards facts.” The company said it won’t be affected because any American materials can be replaced by Chinese sources.

Other companies didn’t respond Monday to questions about how they might be affected.

The decision to add the companies to the Commerce Department’s Entity List limits their access to US components and technology by requiring government permission for exports.

American officials complain Beijing’s technology development is based at least in part on stolen foreign know-how and might erode US industrial leadership or threaten the security of its neighbours.

Complaints about Beijing’s technology ambitions prompted President Donald Trump to raise duties on Chinese imports in 2018, triggering a tariff war that weighs on global trade. The two governments signed a truce in January but Trump has threatened to back out if China fails to buy more American exports.

Other companies cited Friday “represent a significant risk of supporting procurement of items for military end-use in China,” the Commerce Department said.

The most prominent name on that list is Qihoo 360, a major supplier of anti-virus software and a web browser.

On its social media account, Qihoo 360 accused the Commerce Department of “politicising business” and commercial research and development.

Companies including Huawei that were targeted by earlier US sanctions deny they are a threat. Chinese officials accuse Washington of using phony security warnings to block rising competitors of US tech industries.

Another blacklisted company, CloudMinds Technology, a maker of internet-linked robots, said all its products “are designed for civilian use.” It appealed to the US government on its social media account to “stop this unfair treatment.”

How to convert Inpage file to Unicode or Unicode to Inpage

Fake news about the novel coronavirus disease is a rampant problem across our social timelines. Think misinformation about treatments, symptoms and anecdotes tainted with...
Read more