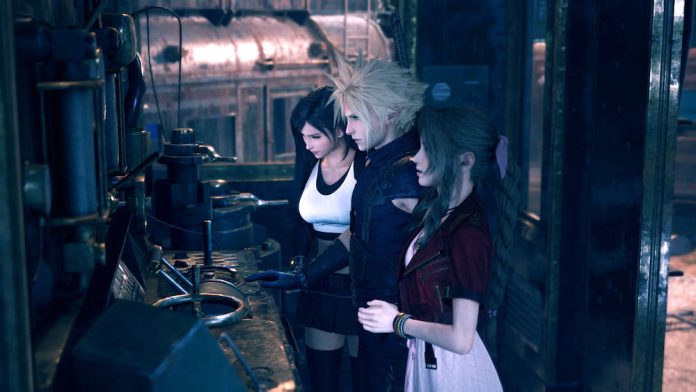 We’re here to continue guiding you through Midgar in Final Fantasy 7 Remake with another installment of our spoiler-free walkthrough. We’re venturing into the Sector 7 Train Graveyard in Chapter 11, a section of the game that includes some especially useful weapons to find, but which are some of the easiest in the game to miss. Keep reading below for all the details.

Check out the rest of our Final Fantasy 7 Remake guides so you don’t miss a single secret or collectible. You can also read our FF7 Remake review.

Enter the train graveyard and pass through the first train car. You’ll exit out into a large area with a few enemies to kill. Go straight across to the east and pass through another train car, then head south behind a cargo container to find a chest with a Mythril Rod weapon for Aerith.

You’ll work your way through multiple additional trains and yards up ahead. When you reach the north end of the area, before crossing a bridge made out of scrap, slip between two train cars down a path to the west, where you’ll find an HP Up Materia.

Ahead is the Maintenance Facility. Once you can move through the train car on the west side, take the stairs up, but ignore the sign that directs you through the door. Instead, cross to the east and take the stairs down. You’ll find a treasure chest that contains a Gothic Bangle armor.

Keep moving until you get into the building on the west side of the area on the second floor. Head south and turn back east to find another door you can open, which leads to a chest with two mega-potions. At the north end of this side, take the stairs down, then turn back north for another chest with an ether.

Cross to the far side of the area and take the stairs back up. Check the blocked bridge just south of the staircase for a chest with 1,000 gil inside. Heading through the building south of you leads to another chest, which contains a Moogle Medal. Head up the stairs toward the central building when you’re done to buy the Let the Battles Begin Music Disc from the vending machine.

Beating the Ghoul requires you to keep an eye on it, because only certain attacks will work at certain times against the big ghost. When it’s solid, you can hit it with melee strikes, but magic will be pretty ineffective. When the Ghoul becomes ghostly and lit in red, melee attacks lose their potency, so switch to magic–landing any big spells will seriously drive up the Ghoul’s stagger bar, with Fire being the most effective. You’ll want to outfit Aerith with some strong spells, but scatter a few good materia to Tifa and Cloud as well, so they can also help out when the Ghoul shifts forms.

The Ghoul primarily likes to use its Telekinesis attack to suck up objects from around the room and chuck them at you. When that happens, duck behind any other debris you can for cover. You’ll also want to watch out for the Ghoul’s slash attacks. When the Ghoul is corporeal, its slashes leave a blue line on the ground that’ll explode to deal big damage to your team, so be sure to dodge clear. When the Ghoul is ghostly, it can turn invisible to ambush your team with slash attacks, so watch for the red light that indicates where the ghost is.

The Ghoul likes to use a big scream attack that can stun your teammates if you’re too close, and it has additional attacks that can afflict characters with silence. Switch quickly to attack the ghost if it stuns one of your group to interrupt its follow-ups, and keep Echo Mist on hand in case you get silenced.

Do damage when you can with your melee team, but the time to capitalize is when the Ghoul is in ghost form and you can have a big effect on its stagger gauge. Hit the Ghoul with a couple of big spells and it should get pressured; close the distance with Cloud and Tifa and use moves like Focused Strike and Focused Thrust to try to stagger it.

Once you hurt the Ghoul enough, you’ll get into the second phase of the fight, in which the ghost will add additional attacks, with blue flames crossing through the room and more area attacks around itself that you’ll need to dodge away from, like Balefire. You should also watch out for the Ghoul to pick up all the objects in the room and swirl them around in the air; when that happens, stop attacking and get well clear.

The Ghoul will pick up a party member and hold them up in the air. However, this Ghoul is a lie! When this happens, remove your lock-on and look to the other side of the room to attack the real Ghoul. Wail on him enough, and he’ll be forced to free your party member.

The Ghoul isn’t too tough, so maintain spell pressure when it goes ghostly to put him back in the grave where he belongs.

When you finally lower the train car with the crane, head through the first car and turn left to exit. You can fight through some Lesser Drakes here to reach a chest with three echo mists inside.

Continue outside and activate the turntable. Smash the crates for a moogle medal, then cross the turntable and head to the right to find a chest with a hi-potion inside.

Further up, you’ll use train engines to push other cars out of the way. The second time you do, check to the right of the engine to find a chest with 2 mega-potions.

First and foremost: Bring Steal Materia to this fight. Eligor carries the Bladed Staff weapon for Aerith, and you can only get it if you steal it off him. Steal attempts seem most effective when the boss is staggered, but keep up the attempts throughout the fight until you get your prize.

Eligor is a ghostly chariot who is particularly weak against Ice magic, but Fire and Lightning are also pretty effective at pressuring the boss and pushing its stagger meter, and you’ll want to stock Wind spells for later as well. Physical attacks, on the other hand, are tough to land against Eligor. The boss is highly mobile, which can be troublesome for Ice spells, since they take a moment to detonate, but Thunder spells can make up the difference in a pinch with their guaranteed hits. Watch Eligor’s movements so you can hit him with spells when he’s stationary. Aerith is the obvious choice for spell-slinging, but extra Ice Materia on Cloud and Tifa can help spread out that burden.

You’ll still want to bring melee attacks against the boss, they’re just tougher to land than usual. The wheels of Eligor’s chariot will bounce Cloud’s blade, so you generally want to circle around the back of the boss and hit it from there–since most of Eligor’s attacks go straight out in front of it, its back is also the safest place to be. You’ll be most effective if you can hit Eligor with magic, but barring that, your melee fighters should work to stay behind Eligor and hit him as constantly as they can manage. Boost Tifa with Unbridled Strength and pummel him with Cloud’s Deadly Dodge and Punisher Mode attacks.

In the first phase of the fight, Eligor is mostly a problem because he’ll try to run you over with Trample. It’s a move that can send you flying and do a lot of damage, but you can guard your way through it. That’s the advisable course, since it’s very tough to effectively dodge the huge chariot as it comes barreling toward you. The Sweeping Gaze attack is also a problem, but easily avoided: when you see Eligor getting ready to use it, disengage and move well back to keep out of its range.

Magic is great for staggering Eligor, allowing you to pummel it and move on to the second stage of the fight, which sees Eligor taking to the air a whole lot more, which often will put him out of range of physical melee attacks. Aerith’s regular attacks can help maintain damage when this happens, but you’ll probably want to use Pray and Healing Wind to top off your party’s HP while you’re not in direct danger. This is also when you want to use Wind magic, because if you can hit Eligor with Wind while it’s flying, you’ll give it a ton of stagger. And while melee attacks are tough, if you can get a jumping attack off and hit the boss, you can knock it out of the air, as well.

While Eligor is up there, he’ll use a Piercing Gaze laser attack that will stun your characters, then start throwing electric javelins at you. Dodge away and hide behind the cargo container in the room until it’s destroyed. If you can get around the side of or behind Eligor while it’s doing the javelin attack, hit it with Wind or melee strikes to get it out of the air.

The final phase of the fight highlights Eligor’s final weakness: his chariot’s wheels. Unfortunately, he’ll be moving very fast the whole time while swinging a blade, so you’ll want to try to stay in the center of the arena to avoid getting cut apart. Use magic on the wheels and be careful of the javelins that’ll occasionally fall out of the sky just above you. You’ll also want to be wary of the Wind of Gehenna attack–heal whoever gets pulled into it, or risk them getting knocked out in one big hit.

Go to town on the wheels while keeping your team healthy, and you should eventually stagger Eligor and finish it off. This party ain’t afraid of no ghosts!

Want us to remember this setting for all your devices?

Please use a html5 video capable browser to watch videos.

This video has an invalid file format.

GameSpot may get a commission from retail offers.

Got a news tip or want to contact us directly? Email [email protected]

In a memo yesterday detailing relief efforts for small businesses during the COVID-19 pandemic, the California Department of Alcoholic Beverage Control has temporarily allowed...
Read more

These 6 tips will help keep your Facebook clean, secure and private

You can now keep your Facebook clean, secure and private with these 6 simple tips Many of us have got hundreds of Facebook friends, some...
Read more