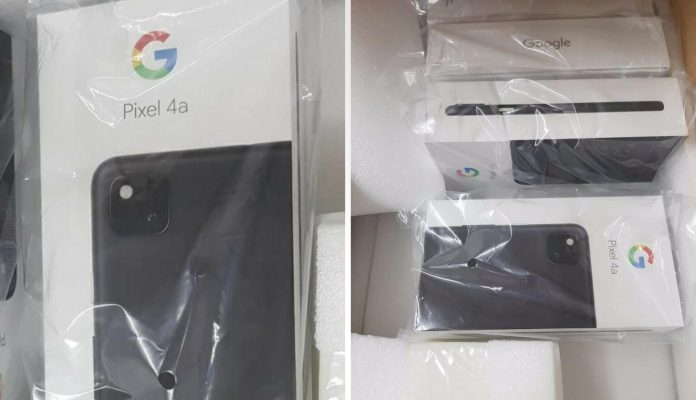 You are here: Home / News / Google Pixel 4a retail packaging leak could mean launch is around the corner

The rumors and leaks of Google’s new mid-range smartphone – the Pixel 4a –  are starting to mount up and a recent leak hints that it could be arriving any day now. A leaked image by TechDroider shows what could be the retail packaging of the Google Pixel 4a and it looks legitimate. The leak shows a standard Google Pixel box design and images of the phone that match the recently leaked billboards. When we start seeing leaks of what appears to be final packaging it can only mean one thing: the phone is nearly ready to launch.

The images aren’t super revealing but do further confirm the phone design that we saw in the leaked billboards that were shared by Evan Blass a month ago. We see the Pixel 4-style square camera bump and similar box design language that has been used for other Google phones. Other than that, the boxes don’t give away much about the phone but it is good to see familiar packaging.

There have been some reports by 9to5Google that Google might not release a Pixel 4a XL and will only release a 5.8-inch display model. But it does look like the phone will feature a 60Hz OLED display and might have a slightly taller aspect ratio of 2340 x 1080.

A couple of other potential Pixel 4a features include a 3.5mm headphone jack, a 12-megapixel rear camera, a hole-punch selfie camera, and a rear-mounted fingerprint sensor (although this is hard to confirm in the leaked photos above.) There isn’t a dual-camera system, Motion Sense radar controls, or Face Unlock – but the Pixel 4a is reportedly going to have a starting price of $399 and at that price, it could bring a lot to the table.

Even with all of these leaks, we still aren’t sure when Google will launch the Pixel 4a. Last year’s Pixel 3a was released at Google I/O but that event has been entirely canceled for 2020 due to safety concerns surrounding the coronavirus. Given the state of things, this device is likely to be announced with a blog post and will be available to purchase in select retail stores and online. The leaked packaging hopefully means that Google is preparing for the launch and that we could see the Pixel 4a launched sooner rather than later. Will Google maybe release the Pixel 4a and the Pixel Buds together? I sure hope so!

The Stanford Health Care Clinical Virology Laboratory has launched a diagnostic test developed for the virus that causes COVID-19. The test is being used for patients at Stanford Hospital and Lucile Packard Childrens Hospital Stanford suspected of being infe…
Read more

An Update from Robinhood’s Founders