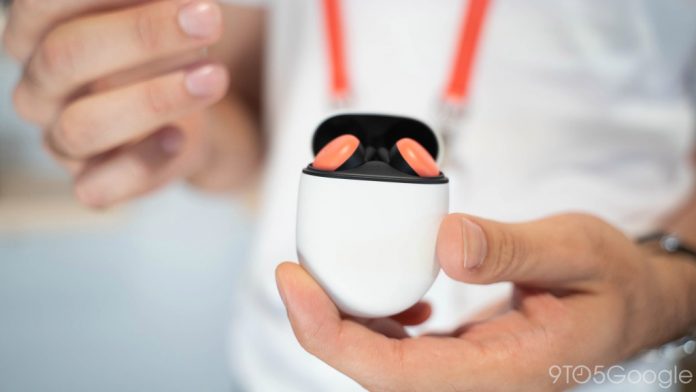 In mid-February, B&H Photo briefly put up Google’s forthcoming Pixel Buds 2 for pre-order, and just a couple days ago, another listing for the headphones came from Chicago-based retailer Abt. The product was priced at $179, but no actual release date was provided. Now, buyers are being notified by Abt about a potential shipping date.

According to a trusty 9to5Google reader, the retailer is now sending out emails to those who preordered the latest generation of Pixel Buds with some details about when they might expect them to ship.

Abt seems to quote directly from the mouth of the Mountain View, California-based company when it says Pixel Buds 2 should be arriving in the warehouse sometime in late April or early May:

We are writing to keep you updated on the status of your pre-order for the Google Pixel Buds – GA01470-US. We have been informed by Google this new product is expected to be releases to arrival in our warehouse by end of April/early May. We are continuing to work with Google to receive this product as soon as possible. Once received we will promptly ship your order.

With that in mind, it’s safe to say that Google’s release date for the Pixel Buds 2 is around that same timeframe. Not only will various retailers that carry first-party Google hardware products likely be selling the headphones sometime in late April/early May, Google will probably begin shipping themselves around that time as well.

Pixel Buds 2 have been on a long journey, first being announced at last year’s Made by Google 2019 event. We went hands-on with the Pixel Buds 2 at that event, and since then, they’ve made appearances at Bluetooth SIG, the Wireless Power Consortium, and the FCC, just in time for a as-yet-unannounced release date sometime this Spring.

Desperate to exit, a $10B price tag for Magic Leap is crazy

Augmented reality headset maker Magic Leap has struggled with the laws of physics and failed to get to market. Now it’s seeking an acquirer, but talks with Facebook and medical goods giant Johnson & Johnson led nowhere according to a new report from Bloom…
Read more

Research firm Canalys has released its quarterly estimates on global PC shipments for Q1, and despite a surge in demand, “severe delays in production and logistical issues,” meant an 8 percent drop in shipments year-over-year. Both the demand and the delays are related to the coronavirus pandemic; while many people are working remotely and students…
Read more