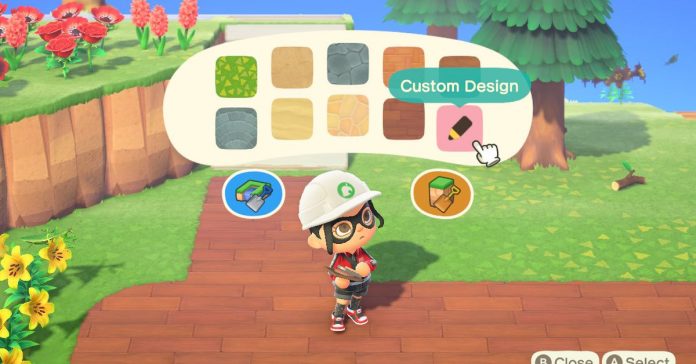 Once you unlock it, the Island Designer Nook Phone app has nine paths, but if you want more options, you can use the custom pattern tool to quickly slap some more paths onto the ground. Note that you can place these patterns down manually by choosing “Display on Ground” from your Custom Designs app, but using the Island Designer app is much faster.

The “custom design path permit,” which allows you to use custom patterns in the Island Designer app, can be redeemed for 2,300 Nook Miles at the Nook Stop.

There are multiple ways to get custom pathing patterns. You can make them yourself or you can download them using QR codes or from the terminal in the back of the Able Sisters’.

If your chosen design uses a QR code, you’ll have to download the Nintendo Switch Online app for iOS or Android. After you snap a picture of the QR code in the app, you’ll have to open your Custom Designs app on your Nook Phone in New Horizons and press the Plus button. This will download that pattern and allow you to place it among the rest of your patterns.

If the custom path uses an alphanumeric code, you can input it into the terminal in the back of the Able Sisters’ store. You will need an Nintendo Switch Online subscription to use this, though.

MUST READ  Oculus Quest: How to optimize and extend battery life

Here are some great place to snag some custom path patterns:

How to place custom path patterns

Once you have your path pattern, open the Island Designer app, press Plus, and select the custom pathing tool on the bottom right. It will let you choose from your patterns and you can quickly use the trowel to place them on the ground.

Unlike the game’s built-in paths, these function a little differently. By pressing Y while standing next to the pattern, your character will kick away the pattern with their foot. If you spend a lot of time placing patterns on the floor, be careful not to kick your custom patterns away.

You also cannot bevel your custom paths to get the rounded texture, but you can outsmart the system by placing transparent custom paths on top of existing default paths. This will make your custom path take the same shape as the path it’s placed on top of, though the design needs to have at least one pixel of transparency in it to do this.

As a nice improvement from Animal Crossing: New Leaf, items can be placed on top of patterns on the ground. This means you can shake fruit off of trees and they’ll fall onto the pattern. (New Leaf had the items bounce off of the patterns, sometimes bouncing into the void if there wasn’t enough room.)

When the PlayStation 5 ships later this year, it will come with a new controller: the DualSense. The PS5's DualSense controller is a large departure from the PS4's previous DualShock 4 design, sporting several new features including advanced haptic feedback. It's also got a new coat of paint to match, and despite not seeing what…
Read more

Most video call apps are designed for conferences, not fun. Normally only one person can speak at a time in a standard conference call and it only gets worse the more people there are.This isn't like in real life, where we zone in and out of large groups, form smaller ones as the conversation takes…
Read more

Before face unlocking technology became the security metric of choice for OEMs, Pixel phones boasted a rear-mounted fingerprint sensor that also supported swipe gestures. When the Pixel 4 opted to remove that sensor, rear-mounted gesture support went with it.…
Read more