Microsoft on Wednesday introduced a slew of new products, including the Surface Go 2, the Surface Book 3, Surface Headphones 2 and Surface Earbuds.

Both the Surface Go 2 and the Surface Book 3 are offered in versions for the consumer and corporate markets.

The commercial versions of the Surface Go 2 and the Surface Book 3 are shipped with Windows 10 Pro and access to Microsoft Advanced Exchange, a warranty service offering free expedited device replacement, in supported markets.

“The Go 2 is a high-value product — the Surface Book 3 high innovation,” he told TechNewsWorld.

“This is where weight, size and connectivity will make a big difference in many consumers’ purchase decisions,” said Eric Smith, a research director at Strategy Analytics. “When it comes to productivity, we expect the newest generation of Surface Book and Surface Go to continue adding to Microsoft’s market share.”

The Surface Go 2 “is Microsoft’s way of showing that Windows can still compete against iPad in the detachable segment without being a premium or enterprise-grade device,” Smith said.

Now that the iPad and iPad Air both have native keyboard capabilities, they are providing stiff price competition to the Surface Go 2, he told TechNewsWorld, but “the productivity capabilities in Windows are still stronger than in iPad OS.”

The Microsoft Surface originally was positioned as an alternative to Apple, and the Surface Go 2 “comes the closest to providing a compelling iPad alternative,” observed Enderle.

Configurations range from the base model’s dual-core Intel Pentium processor, 4 GB of DDR3 RAM, and 64 GB of eMMC storage to the top-of-the-line model’s 8th-generation Intel Core m3 processor, 8 GB of RAM, and 128 GB of SSD storage.

The Surface Go 2 has a USB-C port, a Surface Connect port, a microSDXC card reader and a headphone jack. It supports WiFi 6 and Bluetooth 5. The top-of-the-line model offers LTE Advanced connectivity.

The Type cover has to be purchased separately.

“The Surface Go 2 Type Cover offers a great typing and trackpad experience, building on all we’ve learned through the years of delivering Surface products,” a Microsoft spokesperson said in comments provided to TechNewsWorld by company rep Lianna McCurdy.

“WiFi 6 is a big step up as 5G begins to take off and consumers start to compare WiFi to faster speeds and lower latency over the next several years,” Strategy Analytics’ Smith said. “The option to add LTE Advanced also stands out as a way to provide true mobility in a world quickly trending towards work/learn from-from-anywhere behavior.”

MUST READ  Google tracked his bike ride past a burglarized home. That made him a suspect.

The consumer version of the Surface Go 2 ships with Windows 10 in S Mode, which restricts users to installing apps from the Microsoft Store. Purchasers can make a one-time, non-reversible switch to standard Windows 10.

“Previously their highest-grade GPU was a GTX 1060, which at the time was a solid gaming GPU but just won’t cut it for the performance hogs today,” he told TechNewsWorld. “Quadra availability remedies all of that, and I think this is a product that can excite creative professionals and prosumers.”

The 13.5-inch version comes in four consumer models and one commercial model, and the 15-inch version has several offerings in both categories.

The consumer versions of the 13.5-inch Surface Book 3 have a 10th generation i5 or i7 Intel Core CPU, 8-32 GB of RAM, and 256 GB to 1 TB of storage. The base model has an integrated GPU and the other models discrete GPUs.

The commercial version has a 10th generation i5 CPU with 8 GB of RAM, 128 GB of storage, and a discrete GPU.

“This is a modular computer that has an impressive breadth from the low-powered tablet to the high-powered portable workstation,” said Enderle.

Depending on the configuration, the Surface Book 3 “has a lot of performance in a small package. Battery life and performance stand out. Typically, when you get this much performance, battery life sucks,” he noted.

“This is also one of the more innovative designs in the segment,” Enderle continued. Artistic creators can “powerfully create content on it as a laptop and then conveniently showcase it in tablet form.”

The 15-inch version with the GeForce GTX GPU can play the top Xbox Game Pass for PC titles at 1080p at 60 frames per second, Microsoft said. The Quadro RTX GPU is aimed at commercial customers and institutions of higher education.

Tune Out, Tune In

With 13 levels of ambient noise control, the Surface Headphones 2 are the functional equivalent of closing the office door to concentrate without distractions, Microsoft suggested.

This capability may be especially attractive to people working from home during the pandemic, sharing space with roommates, kids, significant others or pets.

The active noise cancellation is adjustable through on-ear dials. Users can tune the headphones not only to block out, but also to amplify human voices when circumstances warrant.

Both sound quality and battery life are improved over the previous model.
A design update allows the ear cup to rotate 180 degrees for greater comfort while worn around the user’s neck.

Stay Connected on the Go

Surface Earbuds offer a more streamlined option for users who want the flexibility to listen to music or take a phone call while multitasking and maintaining awareness of their surroundings. 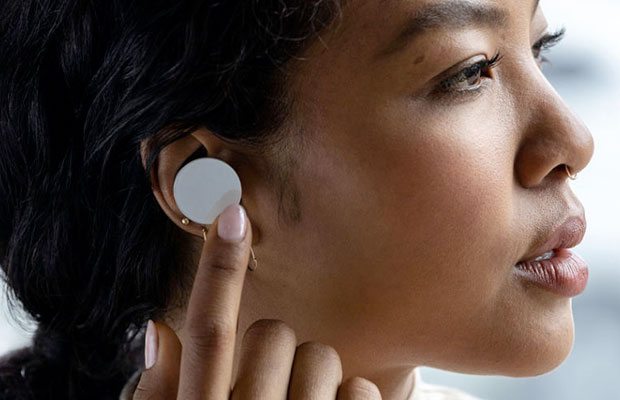 Touch controls allow operations like starting a call or changing a song without taking out your phone.

Users can play Spotify from an Android phone with a triple tap on either earbud.

Screen-free integration with Microsoft 365 provides access to email with Play My Emails in the Outlook Mobile App for iOS, as well as the ability to dictate in Word, Outlook or PowerPoint.

A wireless charging case is included.

The Surface Go 2 will be available May 12 in North America, Europe, Australia, New Zealand and Japan, and in other markets later.

An educational version, which is a branch of the commercial line, is available for $500 to $550.

The 13.5-inch Surface Book 3 will be available on May 21 in North America, Australia and New Zealand. It will roll in other markets later.

The 15-inch Surface Book 3 will be available on May 21 in North America and roll out to other markets later.

Surface Headphones 2 will be available for $249 starting May 12.

Priced at $199, Surface Earbuds will be available starting May 12.

Richard Adhikari has been an ECT News Network reporter since 2008. His areas of focus include cybersecurity, mobile technologies, CRM, databases, software development, mainframe and mid-range computing, and application development. He has written and edited for numerous publications, including Information Week and Computerworld. He is the author of two books on client/server technology.

Zoom video conferences aren’t as private as you think

Zoom has seen a flood of new users as the COVID-19 outbreak forces more and more employees to transition to working from home. Zooms big selling point is its near-frictionless video calls. However, new users should be aware of the companys privacy practices…
Read more

Square Enix's Yoshinori Kitase wants the Final Fantasy 7 story to inspire future generations of gamers, and he's ready to spend the rest of his career ensuring that it does. In a conversation with GameSpot about the Final Fantasy 7 remake, Kitase explained…
Read more

Simple Ways to Improve English Pronunciation with Apps Before we move on to the right apps, it might be useful to keep these tips and...
Read more