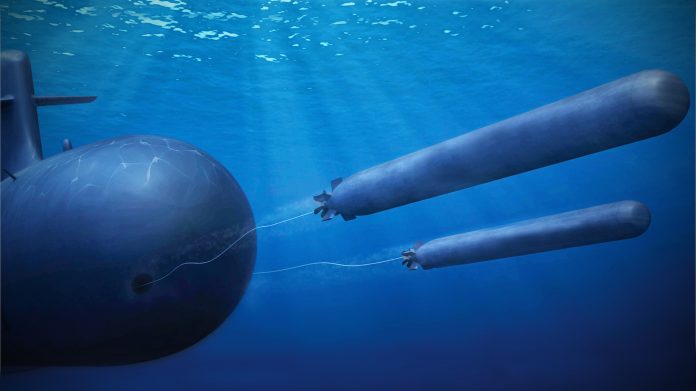 Most modern submarine-launched torpedoes are dual-purpose, meaning they are able to sink a ship or submarine, but they have different characteristics and methods for achieving those goals. Single-purpose torpedoes have a very specific method of attack and can be difficult to evade. In this article, we will cover the capabilities of both kinds of submarine-launched torpedoes and how they actually work, which is very different than what you have probably seen in the movies.

Modern submarine torpedoes come in two variants: thermal and electric. Thermal torpedoes use a fuel, such as OTTO Fuel II, which can be burned without an external oxygen source. A gas turbine or axial piston engine converts this fuel into torque that spins counter-rotating propellers, propelling the torpedo up to speeds in excess of 60 knots. Higher speeds can be achieved if Hydroxylammonium Perchlorate (HAP) is injected during fuel combustion. A HAP boost gives thermal torpedoes a speed advantage over electric torpedoes.

Thermal torpedoes can have a much longer-range at higher-speeds than their electric counterparts. Liquid fuel stores more energy and can be burned more efficiently in modern gas turbines engines, giving these lethal weapons the engagement range and speed required to hit any target from outside detection range.

Gas turbine engines have replaced older external combustion, axial piston-driven engines in some modern torpedoes. The higher RPM of a gas turbine engine coupled with sound silencing modifications to the torpedo chassis and exhaust have made thermal torpedoes as quiet as the submarines that launch them. It is likely that if a modern torpedo uses passive sonar for homing, a target will never know it’s being attacked until just before it explodes.

Electric torpedoes are more common because they are easier to make, maintain, and are less risky to handle. They also have some capabilities thermal torpedoes do not. These high-torque, permanent magnet electric motor torpedoes ramp up to speed in under a second. They go from sitting in a torpedo tube to 50 knots in a near-instant because they don’t have the mechanical lag and inertia thermal torpedoes must overcome during startup.

Another big advantage of electric torpedoes is that they can be modular in design, such as Germany’s DM2A4 Sea Hake Mod 4 torpedo. The batteries are connected in series allowing each weapon to have 2, 3, or 4 batteries. More batteries give the weapon more range. Fewer batteries make the weapon much lighter and more agile, but at the cost of range. Both can maintain 50 knots and, like modern thermal torpedoes, are very quiet.

Submarine movies such as Crimson Tide and Hunter Killer use torpedo chase scenes for dramatic effect. The reality is that a torpedo maneuvering and hunting submarines that are frantically trying to evade is the least likely scenario in a modern submarine attack. As already noted, in a 21st Century torpedo attack, the target will likely never know it’s about to be destroyed. Modern submarine torpedoes have sound silencing built into their design and, unless they use their active sonar modes, they may not be detected until the moment before detonation.

A common event observed in naval exercises is two submarines passing within a few hundred meters of each other, detecting each other at the same time, and racing to get a shot off before the other. The other type of engagement is when one sub detects the other sooner, and often at range, resulting in a first shot, first kill. So, the underwater prolonged dogfights that are such beloved set pieces of modern submarine thrillers are just not the reality. Actual underwater combat occurs silently with very little reaction time to fend off an impending attack.

In addition, many modern torpedoes have a command wire or fiber optic cable that reels out from behind the torpedo and establishes a data link with the submarine’s fire control system. Before a torpedo is launched, it must know three things:

With command wire capabilities, the weapon can change its attack geometry or even shut down if directed by the fire control operator. Detected targets can be changed, depth and range limitations can be set, and countermeasures, such as decoys and jammers, can be ignored using the submarine’s sonar data instead of the torpedo’s lower-fidelity onboard sonar data. If the data link is lost, the weapon will follow its last given command and execute pre-programmed countermeasure defeating profiles, if necessary.

The submarine’s fire control system has gives the weapon digital boundaries, or a “kill box.” These boundaries are designed to prevent the weapon from attacking the firing platform or any other target outside the designated area. These boundaries shape a three-dimensional cube of water space and can be very large or small as determined by the Weapons Officer before firing.

The torpedo will run out on a predetermined course and depth to the kill box. During this transit, the weapon is measuring ambient background noise and getting to its search depth, unless otherwise directed. It can calculate how strong it will transmit its high-frequency active sonar without reverb, distortion, or saturating detections with background echos.  During the search, the torpedo will lower its speed and its sonar transmit power level to maximize detection capabilities. This is especially critical in complex, shallow water, noisy, and icy environments.

When the weapon reaches this kill box, it activates its own sensors and begins hunting for a target. If the data link between the submarine and the torpedo is maintained, the fire control operator can change the size and dimensions of the kill box at any time. They can also manually steer or shut down the weapon on command.  If the weapon ever leaves the kill box, it will inert its warhead, shut down its engine, and sink to the bottom of the ocean. A torpedo cannot be ‘command-detonated’ as seen in the movie Hunt for Red October.

It is possible for the firing platform—the submarine that fired the torpedo—to enter the kill box during a torpedo attack. If not shut down, the torpedo would consider it a valid target. Situational awareness is key during a torpedo attack to prevent this. During wargame exercises, submarines have crossed into their own kill boxes while evading counter-fire torpedoes.

65cm Wake homing torpedoes, like the Russian 65-76A, are large long-range torpedoes designed to search for a ship’s wake and follow it. 65cm torpedoes have enough fuel to travel in excess of 100 kilometers at 50 knots for just over an hour. This makes evasion a very time-consuming affair, allowing the attack submarine time to evade and re-engage. There are ways to actively defeat a wake homing torpedo, but a salvo of this kind of weapon is a carrier killer.

Terminal Homing is the final stage of the torpedo attack. Once the torpedo has detected a valid target, it will transmit the target location, speed, depth, and course back to the submarine’s fire control system. This data will be compared with the fire control solution. Unless otherwise directed, the weapon will enter terminal homing. Terminal homing is an active sonar ping that retransmits on reception becoming more rapid as the range to target closes at maximum speed.

The active sonar transmission cycle becomes shorter in interval as the range closes, similar to a doomsday clock countdown. The target is alerted to the attack, but there is nothing it can do to defeat the weapon at this point. The weapon is too close and moving too fast to allow time for a countermeasure to be effective.

Combination fusing is the most common in today’s torpedoes. This combines proximity fusing, which is both magnetic and measured distance, and contact fusing which detonates on physical impact. It is best if the weapon detonates within a meter of the hull, but a contact detonation can have devastating effects against even the largest warships.

Modern submarine torpedoes are highly capable and amazingly lethal machines. Cold War science and experience has been improved with 21st-century technology and engineering. Torpedoes like the BAE Systems Spearfish, Atlas Electronik SeaHake Mod 4, Naval Group’s F21, and Russia’s UGST-M are examples of how far the technology has come.

A potent cocktail of high-speed, lethality, long-range, and low-detectability give the modern torpedo attack a significant advantage over other naval weapons.