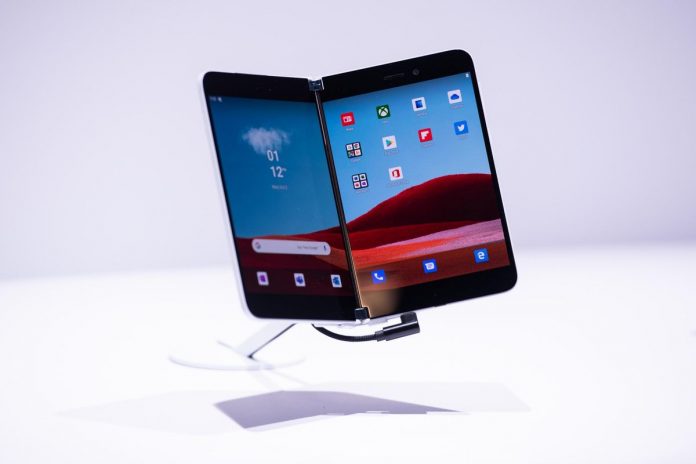 Microsoft’s dual screened Surface Duo and Surface Neo devices are sitting on the cutting edge with their dual screens, new software, and exciting form factors. But new documents reveal that Microsoft has been working on a design that is even more exciting for its folding devices.

The design comes from a recently published patent, titled ‘Device Having A Screen Region On A Hinge Coupled Between Other Screen Regions’. Windows Latest reports:

“In the filing, the Redmond firm explains that typical smartphones have a single screen where all relevant information is displayed to the user. Some information such as notifications of calls or messages may be overlooked by a user and Microsoft aims to address these problems with its patented idea.

“The third screen which is called ‘edge screen’ is the screen region of the hinge and information would be displayed on edge screen based on the orientation of the device.”

The current wave of folding smartphones and tablets all face the issue of how to get information to the user when they are in a closed state. The single screen smartphone always has the screen available to show notifications, but if you sandwich the main screen inside the hinge you don’t have that easy access.

Hardware designers have taken a number of approaches to this. Samsung’s Galaxy Fold carried the equivalent of a smartphone screen on the outside, albeit with huge bezels that didn’t sit well with the futuristic design of the Fold.

Huawei’s Mate X folding smartphone took a different approach by folding the screen around the outside of the device. Closed you still have the main screen on display so a UI tweak on Android allows it to be used to see alerts and to continue being used.

Samsung’s second folding phone, the Galaxy Z Flip, tweaked this approach to put a smaller notification screen on the outside cover which could display alerts, but would never be mistaken for an Android home screen. Motorola’s folding Razr took a similar approach. Although it employed a larger screen it did not try to replicate an Android UI (but it allowed you to preview your selfies).

Although Microsoft’s Android-powered Surface Duo and Windows 10 powered Surface Neo come with dual screens rather than a single folding screen, the hinge will rotate through 360 degrees. The obvious folded mode is ‘screens in’ for protection, in which case the question around alerts needs to be addressed.

The Duo and the Neo are not being sold as smartphones so there is perhaps less of a need to display alerts in the same volume as a phone, but the need will still be there. The current design of the Surface Duo that has been seen ‘out in the wild’ does not show any sign of a third screen in the hinge or the edges of the devices.

Given the complexity of the hardware and software integration alongside the locked in launch window of Q4 2020, there’s a good chance this will not be seen in the first iterations… there’s just too much to do. Neither is it guaranteed that technology in a patent will show up in any consumer product.

What is clear is that Microsoft continues to think about use cases in hardware and innovative solutions to those problems. And there’s no reason why this solution has to be limited to the likes of the Duo or the Neo. Secondary screens are starting to show up in laptop designs, and this trick may be something adopted by other Surface devices in the future.

Android vs iPhone : Which is more secure?

iPhone vs Android smartphone ? Which is the most secure of them all If you ask this question on a smartphone forum, rest assured, you...
Read more

FCC looks to mandate anti-robocall tech after prodding from Congress

The FCC is finally going to require wireless carriers to implement an anti-robocalling technology, after asking them nicely for more than a year to...
Read more

These simple trick can help you speed up the performance of your Android smartphone or tablet It is pretty logical that a phone’s capabilities depend...
Read more