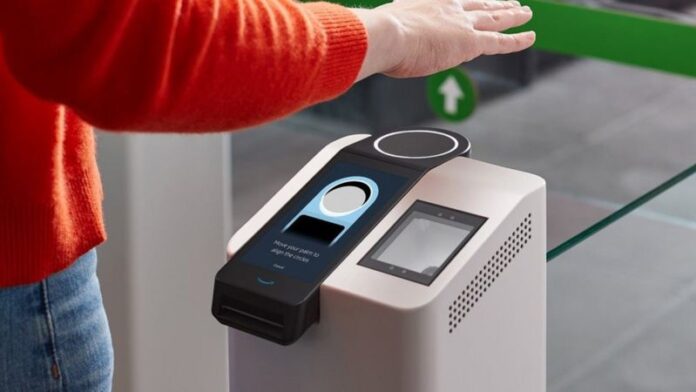 Amazon has announced a new payment system for real-world shops which uses a simple wave of the hand.
Its new Amazon One scanner registers an image of the user’s palm, letting them pay by hovering their hand in mid-air “for about a second or so”, it says.
The product will be trialled at two of Amazon’s physical stores in Seattle.
But the company said it is “in active discussions with several potential customers” about rolling it out to other shops in the future.
“In most retail environments, Amazon One could become an alternate payment or loyalty card option with a device at the checkout counter next to a traditional point of sale system,” it said.
Amazon also said the system could be used for “entering a location like a stadium” or scanning yourself into work instead of using an ID card.
“We believe Amazon One has broad applicability beyond our retail stores,” it added.

Palm scanners are not a brand-new technology, and there are already some commercially available solutions.
“Palm-based identification is based on capturing the vein patterns of the palm,” explains Dr Basel Halak of the Electronics and Computer Science School at the University of Southampton.
“These patterns are different for each finger and for each person, and as they are hidden underneath the skin’s surface, forgery is extremely difficult.”
Dr Halak said the level of security was roughly similar to a fingerprint scan, but could be used at a distance of a few inches, making it much more practical.
“In comparison with other form of identifiers such as physical devices, this form of biometric authentication is based on physical characteristics that stay constant throughout one’s lifetime and are more difficult to fake, change or steal,” he said.
Amazon has not detailed exactly how its version of the technology will work, beyond saying it will use “custom-built algorithms and hardware” and scan “distinct features on and below the surface” of the hand.
But it said one of the reasons it chose palm recognition was that it is “more private” than some other options.
“You can’t determine a person’s identity by looking at an image of their palm,” it said, possibly a reference to the controversy surrounding facial recognition.
The firm has paused police use of its Recognition facial recognition software after civil rights advocates raised concerns about potential racial bias.
Amazon said other reasons for the choice included the “intentional gesture” of holding a palm over a sensor, and the contactless nature, “which we think customers will appreciate, especially in current times”.
But privacy group Big Brother Watch criticised the development.
“Amazon continues to fill the market with invasive, dystopian technologies that solve non-existent problems,” its director Silkie Carlo said.
“No one should have to provide biometric data in order to buy goods or services. Amazon’s attempt to normalise biometric payment and home surveillance devices risks building a world in which we’re more easily tracked and recorded, which will inevitably disempower citizens.”
No Amazon account is required. To register, a customer can just insert their bank card and follow the on-screen instructions to link their palm print to that payment option, Amazon said.
The company promises that the print is not stored on site, but encrypted and kept securely in the Cloud. Customers could also delete their data via website, it added.

ARM-ed Mac: We Have An Answer