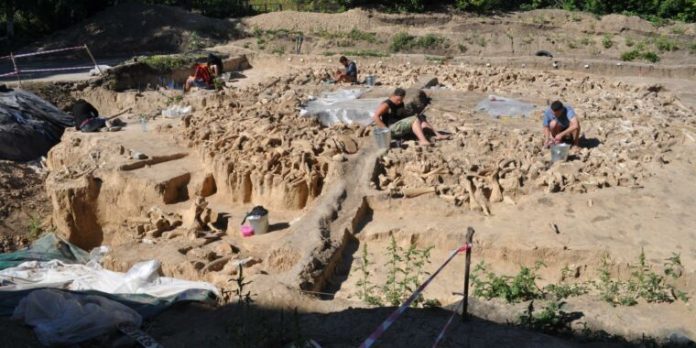 No bones about it —

New dating reveals that people survived in Russia as the last Ice Age closed in.

As the last Ice Age tightened its hold on Europe, a group of people living near the Don River piled dozens of mammoth bones into a 12.5m (30ft) wide circle. They may have lived in the shelter of the mammoth bones for a while, huddling around fragrant fires of conifer wood and mammoth bone and making stone tools. But the traces they left are so light that it seems they didn’t stay long—or maybe they only visited occasionally.

Archaeologists found the bone circle in 2015. It’s one of about 70 mammoth-bone circles scattered around eastern Europe and western Russia, and it’s one of three within a few hundred square meters of each other near the modern village of Kostenki, about 500km (310 miles) south of Moscow. Excavations unearthed the first bone circle at Kostenki during the 1960s. A second structure nearby now lies buried under construction on private land. The third bone circle at Kostenki, discovered in 2015, is the largest and the oldest structure of the sort ever found.

Fragments of charcoal from inside the circle, along with samples of mammoth bone and ivory, radiocarbon-dated to around 20,000 years ago, during the coldest stage of the Last Glacial Maximum. Ice sheets several kilometers thick stretched southward across most of northern and western Europe. But people somehow made a living on the cold, inhospitable steppes just southeast of the glaciers. They also built huge circles out of mammoth bones—archaeologists just aren’t sure why.

“Most other places at similar latitudes in Europe had been abandoned by this time,” said Pryor, “but these groups had managed to adapt to find food, shelter, and water.”

Most researchers assume the rings of bone are the remains of ancient dwellings, which would once have been covered with roofs to keep out the -20⁰C cold of Ice Age winters. But University of Exeter archaeologist Alexander Pryor and his colleagues say the newly discovered circle at Kostenki contains hints that instead of a permanent home, the site could have been a seasonal base-camp, a ceremonial site, or even a food storage depot.

MUST READ  Companies fret as costs soar for software subscriptions

What was it all for?

Inside the circle, archaeologists found burned wood and bone, along with a few hundred tiny chips of stone debris from ancient tool-makers’ work. But 300 stone chips scattered around a 12.5 meter (30ft) wide area isn’t a lot of debris if people were spending a lot of time sitting around the fire, making or repairing tools, for several months a year over many years.

At Paleolithic sites elsewhere in the world where people lived more-or-less permanently, they also tended to leave a much bigger mess behind; the litter of flint-knapping debris at those sites is about ten times denser than at Kostenki. In other words, either the flint-knappers at Kostenki were complete neat freaks, or they weren’t at the site for long.

Pryor and his colleagues say the lack of debris suggests that mammoth-bone circles like the ones at Kostenki probably weren’t long-term homes for Pleistocene hunter-gatherers. But people obviously spent some time within the circle of bones making and repairing stone tools. Archaeologists found flint chips inside the circle and around the three pits just outside it but not anywhere else at the site.

But if the circles weren’t houses, what were they?

Life on the Ice Age steppes

Ancient people also built fires in the bone circle. In the southeastern part of the site, Pryor and his colleagues found burned material, including charred fragments of mammoth bone and charcoal from conifer trees. If you can start a hot enough fire, you can burn bone as fuel, thanks to deposits of fat inside the bone. Until recently, that’s how archaeologists thought people in eastern Europe survived—burning mammoth bones to keep warm and cook what food they could find—since little wood would have been available during the cold, dry Ice Age.

Analysis revealed that some of the charcoal in the bone ring came from conifer trees. Pryor and his colleagues suggest that the trees may have survived in sheltered ravines nearby. The availability of firewood would have added to the appeal of the site, which also offered a natural spring nearby. Water that flowed year-round, instead of freezing, would have drawn people, mammoths, and other animals to the area.

But it’s not clear exactly what people at Kostenki ate, other than probably mammoth. The three pits outside the ring all contained mammoth bones (which could have been food, fuel, or waste), but Pryor and his colleagues didn’t find traces of any other prey animals. The handful of charred seeds mixed with the other burned material in the circle could have been part of an ancient meal, or they could have been mixed in with the firewood.

Archaeologists still aren’t sure what the bone rings’ purpose was. If Pryor and his colleagues are right and the structure wasn’t the foundation of a long-term dwelling, then it could have been a seasonal base-camp or a ceremonial site. If people in western Russia had the energy and time to build a circle of mammoth bones, that suggests they were doing more than eking out a bare-bones living, and Pryor and his colleagues say that’s a little surprising.

“In a future article, we will argue that their function as food-storage facilities should be given further consideration,” wrote Pryor and his colleagues. But the circle’s presence—as mysterious as it remains—proves that people did manage to survive, even in the middle of an Ice Age.

I'd like a home-based voice recognition without some off-site cloud.I'd like a kind of echo dot like thing running on a set of raspberry pi devices each with a microphone and speaker. Ideally they'd be all over the house. I'm happy if they talk back via wifi …
Read more

MIT E-Vent Unit 002 Undergoing Testing, Image by MD If you are working on building a ventilator, please read the Key Ventilation Specifications page! Background & Need We are one of several teams who recognized the challenges faced by Italian physicians, and are working to find a solution to the anticipated global lack of ventilators.…
Read more

Covid19 Lock down, Facebook has solved a big problem for shops