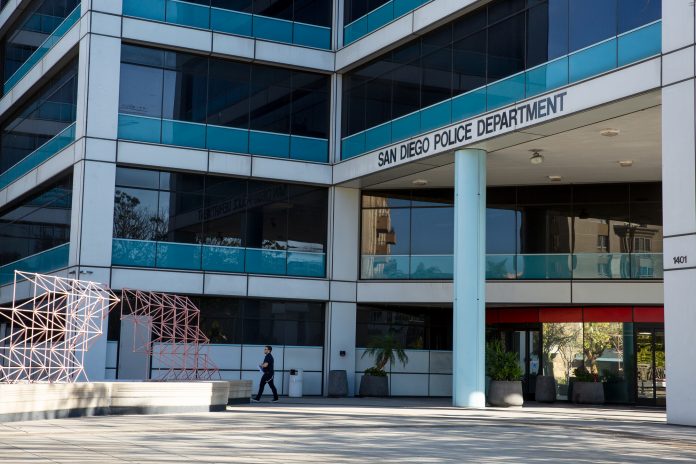 San Diego police are continuing to ticket homeless San Diegans and compel them to move elsewhere despite federal guidance discouraging law enforcement from disrupting homeless camps and potentially fueling the spread of coronavirus, and a City Council resolution encouraging the mayor to consider relaxing crackdowns on those sleeping in their cars.

The Centers for Disease Control and Prevention last month encouraged cities not to clear homeless camps unless they can move those living there into housing.

“Unless individual housing units are available, do not clear encampments during community spread of COVID-19. Clearing encampments can cause people to disperse throughout the community and break connections with service providers,” the CDC wrote in interim guidance posted on March 22. “This increases the potential for infectious disease spread.”

Citation data released to Voice of San Diego in response to a public-records request as well as anecdotes from homeless San Diegans and advocates reveal that police have not halted enforcement of encroachment and illegal lodging, offenses associated with blocking a sidewalk and erecting a tent without permission. Homeless people have also been ticketed for sleeping overnight in their vehicles and in parks following recent closures.

From March 23 through March 30, data shows San Diego police ticketed about 125 people citywide for illegal lodging or encroachment alone. Officers cited several people multiple times. And a week after the City Council approved a resolution encouraging Mayor Kevin Faulconer to evaluate a possible moratorium on enforcement of vehicle habitation, three homeless San Diegans were cited for sleeping in their vehicles.

The data shows officers recorded a similar number of illegal lodging and encroachment citations and arrests per day, on average, as they had in previous months. Vehicle habitation enforcement, while less frequent, also closely matched trends in prior months until the latter part of March. County jails stopped booking suspects of misdemeanors, including illegal lodging, on March 16.

San Diego police have defended their enforcement practices and say they have pulled back even since last month.

Capt. Scott Wahl, who oversees the police division that focuses on homelessness and quality of life crimes, said police are trying to balance the risks facing the vulnerable San Diegans living on city streets with complaints and public health and safety concerns that come along with existing camps and those that could grow without police intervention.

“During this time, the officers have been instructed that we are utilizing enforcement as a last resort,” Wahl said. “Our focus is on providing balance during this very turbulent and chaotic time for everybody.”

For example, Wahl said, a nighttime unit that had focused on vehicle habitation enforcement has since been reassigned to the day shift to focus on other enforcement.

Yet advocates, attorneys and even one national expert on health challenges facing homeless populations say the city’s approach is putting San Diegans at risk.

Dr. Margot Kushel, director of the UC San Francisco’s Center for Vulnerable Populations at Zuckerberg San Francisco General and Trauma Center, said any efforts that may lead homeless people to disperse or move from place to place increase the chance that coronavirus could spread elsewhere.

“To think that we’re spending any effort on harassing people and getting them to move seems counterproductive,” said Kushel, who provided input as the state crafted its own guidelines for the homeless population.

Attorney Scott Dreher, who has negotiated settlements dictating the city’s approach to enforcement affecting homeless San Diegans, said he separately plans to ask the federal judge who oversees those agreements to weigh in on the ticketing.

“It’s bewildering to me,” Dreher said.

City Council President Georgette Gómez, who brought forward the proposal to reduce vehicle habitation enforcement, was reluctant to advocate a response on Monday. She wrote in a statement that she was “in the process of gathering a complete picture of police interactions with our unsheltered residents.”

In a Monday statement following the delivery of the cease and desist letter, Faulconer spokeswoman Ashley Bailey hinted that the city is unlikely to change its approach.

She said the city is trying to avoid citing homeless San Diegans whenever possible but also must ensure they aren’t living in unsanitary, unsafe conditions or clustering together in ways that could endanger themselves and others.

“During this pandemic, the city has an obligation to protect homeless individuals and also serve the community by continuing to respond to calls, which continue to come in,” Bailey wrote in an email to VOSD.

For years, police have hit the streets after 5:30 a.m. most days to begin ordering homeless San Diegans who have put up tents or settled in storefronts overnight to pack up their belongings and go elsewhere.

That practice has continued during the coronavirus pandemic. Recent data released to VOSD shows most of the encroachment and illegal lodging citations occurred in the morning hours after a settlement allows enforcement to begin.

Just before 6 a.m. Friday, a few dozen homeless San Diegans packed under a covered space in front of the Central Library in East Village as the rain poured down. Most were violating social distancing mandates by placing their sleeping bags or belongings less than six feet apart.

At 6:25 a.m., a police cruiser pulled up and after a couple moments, officers turned on its lights. Those under the library covering got the message: It was time to start packing up.

“Hey guys, what’s going on? Gotta get moving,” an officer said after emerging from the cruiser about five minutes later.

VOSD did not see police write tickets that morning.

But Sean Davis, 50, later showed VOSD two encroachment tickets he received on April 1 and April 2 at around 6 a.m. at the Central Library, which has been closed for weeks.

Davis, who wore a bag over one of his feet and later removed it to adjust bandages, said he had been ticketed after struggling to get his belongings together quickly in spite of the injury.

“That’s a problem,” Davis said. “Why am I still getting a ticket?”

Since those encounters and on Friday, Davis said police seemed to be taking a more relaxed approach to ticketing, though they also made it clear that he and others could not remain under the library awning.

A handful of other homeless San Diegans who spoke with VOSD agreed with Davis’ assessment while others said enforcement seemed status quo.

“To be honest, I feel like it’s kinda been the same,” said 24-year-old Jacob, who declined to share his last name with VOSD.

Ernesto Rubalcaba, 60, who received a ticket on April 4 for sleeping overnight in Chicano Park, said he was similarly frustrated. Rubalcaba, who is paraplegic and relies on a broken wheelchair to get around, said he remains in that area despite its recent closure because he has access to a bathroom and water fountain there.

When the officer ticketed him earlier this month, Rubalcaba said he questioned where he could safely go.

After all, Rubalcaba and other homeless San Diegans who move their belongings elsewhere are likely to encounter police again – only in a new environment they are less familiar with and perhaps have fewer resources in.

Hayward, who lives in his van, was parking near a friend’s home for a few days when he said police knocked on his window that afternoon and said a neighbor had complained. He said one of the officers issued a warning and told him he would be arrested for vehicle habitation if they encountered him again.

Wahl, the officer who oversees the police division focused on homelessness and quality of life crimes, said many recent tickets and warnings at Chicano Park and elsewhere have followed complaints. He emphasized that police need to continue telling people to move elsewhere – and to issue tickets if needed – to ensure camps don’t grow and violations that can create additional health concerns don’t fester.

He said police almost always offer shelter or other services to those they encounter and that officers have tried to provide more information about resources during the coronavirus pandemic.

Faulconer has implied that the CDC guidance discouraging authorities from breaking up camps may not apply neatly in San Diego because the city does not have many long-standing, large-scale homeless camps.

“We do not have some of the large-scale encampments that you see in other places, in other cities, but we know we still have a huge need for people on the street and so that’s why this is so important, not only to help, as I’ve said with that social distancing, but that network of support that is oftentimes not existing right now because of the entire economy shutting down – bars, restaurants, etc.” Faulconer said at a press conference about the opening of the Convention Center shelter to homeless San Diegans earlier this month. “And so (the Convention Center) becomes an absolute essential piece of the puzzle that did not exist for people before.”

In an email on Monday, the CDC clarified that its guidance does not distinguish between long-standing camps and more temporary ones.

“We did not differentiate approaches based on the size of the encampment,” the federal agency wrote in response to questions from VOSD. “The intent with the guidance is that people who are unsheltered need clear communication, continuity of access to homeless services, and to be able to shelter in place the best they can.”

County health officials directing the local response to the coronavirus pandemic have avoided saying whether they have signed off on the city’s continuing enforcement.

As Half-Life: Alyx launches, Valve talks about what happened to Half-Life 3

28 with 24 posters participating The opening shot of Half-Life: Alyx, as captured from real gameplay. Anything I captured while playing will appear in portrait orientation, due to how SteamVR image captures work. Any landscape images are provided …
Read more

The run on toilet paper and wet wipes has nothing on seriously hard alcohol -- 'cause people fearing a full coronavirus outbreak are snatching up vodka to cook up their own sanitizer. Everclear, the potent 190-proof vodka college kiddos traditionally use for…
Read more

So you think your URL has been blocked from social media? Or you’ve found out through a similar process as me above. Firstly – we are...
Read more