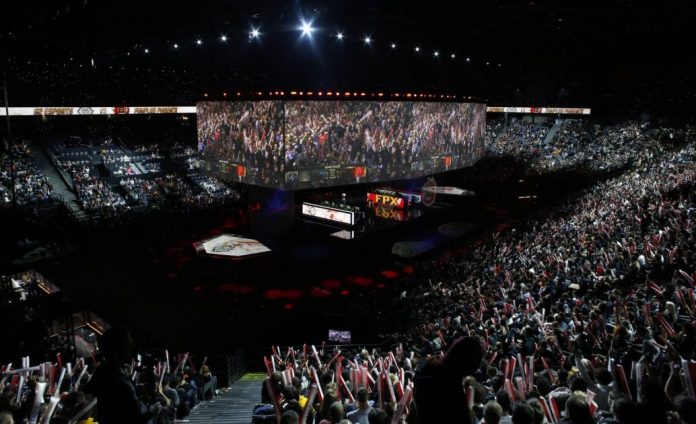 Take NASCAR for example. When in-person races were canceled this year, NASCAR and Fox Sports announced the first-ever eNASCAR iRacing Pro Invitational Series, a simulation-style competition featuring stars like Dale Earnhardt Jr., Bobby Labonte, Kyle Busch and Denny Hamlin racing in digital vehicles. It was the first time many NASCAR fans — and drivers — were exposed to the magic of professional gaming.

The inaugural eNASCAR race aired on March 22nd and it was the highest-rated televised esports program to date, drawing in 903,000 viewers. It was also the most-watched sports broadcast that Sunday, and the most-watched program on its host channel, FS1, since most sports events were canceled on March 12th. The following race on March 30th clocked 1.33 million viewers, breaking the previous Sunday’s record.

“We’re in discussions with many brands at the moment who are looking at esports for the first time,” Torque Esports CEO Darren Cox said, noting this is Jones Soda’s first foray into the industry. “Our goal, and this goes for streaming numbers and fan interest as well, is that the current situation doesn’t become just a blip on the radar. We want to use this as a foundation to continue to grow the sport. Many brands remain in the discovery and education process at the moment, but they are liking what they see.”

I joined the world of Esports today. Thank you @wearetherace for organising the #LegendsTrophy & giving a bunch of us old guys a chance to hang out & race together again.
I was delighted to get the win, thanks @BaseSimulators ,well done on the 1-2 finish with @DarrenTurner007 👊🏼 pic.twitter.com/ojuads0Xra

Greeley noted that in 2019, Nielsen ranked the LCS as the third-most popular professional sports league in the US among 18- to 34-year-olds. This is a coveted market for advertisers, and a sign that esports were already on the radar of major sponsors. The coronavirus pandemic has only accelerated their involvement.

“We see this activity more as a continuation of sponsorship trends than a big change, since the esports ecosystem and leagues like LCS have been gaining momentum for some time now in global media,” Greeley said. “Sponsors are drawn to the size and passion of the esports community, and we believe that’s only going to continue growing from here.”

“We’re introducing esports to a much wider audience, particularly in the motorsports genre,” Cox said. “The ‘stay at home economy’ is something that is expanding rapidly and our live-streaming data analytics team at Stream Hatchet is certainly seeing dramatic increases in all platforms at the moment.”

Of course, the global pandemic has disrupted the esports world, too. Established leagues like the LCS and OWL have the resources to quickly pivot and implement online-only tournaments, and sponsors are already knocking. However, newer leagues might find it harder to catch their footing. For instance, the Apex Legends pro scene kicked off this year and was already struggling with server issues, a lack of advertising and poor management structures before the outbreak began. Organizers announced yesterday they would move the remainder of the Apex Legends Global Series online, with the finals airing on Twitch and YouTube on April 6th. It’s a rough first year for any league.

Even established organizations are feeling the pressure: Chaos Esports Club let go its entire Dota 2 squad following the suspension of the Dota Pro Circuit this year.

“This is not a decision we made lightly, but during these uncertain times and with the DPC circuit suspended it is impossible for us to justify the cost of a Dota 2 team at this time,” Chaos Esports Club CEO Greg Laird said at the time. “The world is an unprecedented situation and it is necessary for us to focus our efforts into a few key current and upcoming projects for the long-term success of the organization.”

Compared with many other industries, esports have experienced low job loss during the global pandemic, largely because leagues are able to transition online instead of shutting down altogether. Unemployment rates in the US are expected to hit their highest point since World War II, with conservative estimates projecting 20 million Americans will lose their jobs in the next few weeks.

Esports are well-positioned to serve an audience that’s trapped at home, and organizers are doing everything they can to capitalize on this strange new market. The trick, they say, is making all of this progress stick even after the pandemic has ended.

“We’re very interested in using this as the foundation for long-term growth,” Cox said. “Esports as a whole has been growing dramatically in recent years and now we’re in a massive spike. Once traditional sport returns we’re obviously going to see a levelling off. But in five years’ time we want to look back on today as not just ‘the COVID-19 esports thing,’ but as a tipping point for when esports took its first steps into the mainstream and cemented its place alongside other professional sports.”

All products recommended by Engadget are selected by our editorial team, independent of our parent company. Some of our stories include affiliate links. If you buy something through one of these links, we may earn an affiliate commission.

A (possible) solution to Covid-19

Notice. Since this seems to be such a common question I think I should describe my background. I have a PhD in molecular microbiology and I used to be a tenured academic (professor). I now work in the biotech space. I have published a number of peer reviewed paper in virology. If you really want…
Read more