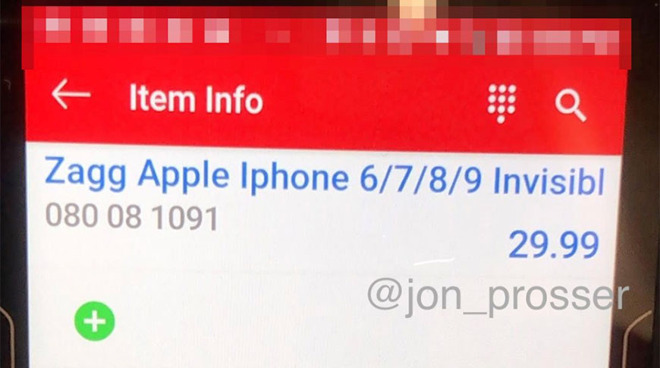 Another day, another “iPhone SE 2” accessory leak. An alleged photograph of what is claimed to be Target’s merchandise stocking system reveals an unreleased Zagg screen protector compatible with iPhone 6, 7, 8 and an as-yet-unreleased “iPhone 9.”

Shared to Twitter by YouTube vlogger Jon Prosser, the picture shows stock information for what is presumably a Zagg InvisibleShield series protective cover designed to fit a rumored “iPhone 9” device rumored to launch in the coming weeks.

Specifically, the listing notes an “[iPhone] 6/7/8/9” accessory that sells for $29.99, the exact price of currently available InvisibleShield products. Alleged compatibility with older iPhone models echoes past reports that claim the so-called “iPhone 9,” also referred to as “iPhone SE 2,” will share a design with 4.7-inch iPhone 8.

The purported Target location from which the photo was taken does not have stock of the item on hand, though the product is expected to sell in stores and online.

The recent glut of accessories for an as-yet-unannounced device should come as no surprise, as third-party case manufacturers, in a bid to be first to market, often release products shortly before a new Apple device is predicted to launch. Firms often rely on leaked schematics or industry rumors to design and manufacture first-run accessories.

Apple is widely rumored to launch a so-called “iPhone SE 2” or “iPhone 9” in the second quarter of 2020. Targeting cost-conscious consumers, the handset is expected to pair an external design borrowed from the 2-year-old iPhone 8 with contemporary innards like an A13 Bionic processor with 3GB of RAM. The tech giant made a similar move with the first iPhone SE iteration, packing a then-current A9 system-on-chip into the handset.

Initially expected to see release in March, recent rumors suggest “iPhone SE 2” will be announced on April 15 ahead of wide availability on April 22.

Updates to form controls and focus

Working from home because of coronavirus? Be careful what you download to keep cybersafe

Coronavirus may be spreading, but it isn't necessary to randomly hoard supplies. Here are some basic necessities to have at home in case of an emergency. USA TODAY SAN FRANCISCO So youve been told to work remotely because of the coronavirus. About the worst…
Read more

Twitter orders all employees worldwide to work from home

Strong encouragement has now become an instruction Illustration by Alex Castro / The Verge All Twitter employees must work from home until further notice in order to help slow the spread of COVID-19, the company announced today. Twitter had already strongly…
Read more