The Facebook-owned messaging app WhatsApp is going to introduce a new feature that will allow the migration of chat history between iOS and Android mobile operating systems in a future update.

The announcement regarding the multi-device feature was made on a website, WABetaInfo, that hinted at the possibility to migrate chat history to a different WhatsApp platform in a future update.

It will allow the usage of WhatsApp account on multiple devices at the same time.

🔄 WhatsApp to allow chat history migration between iOS and Android in a future update!

Finally you will be able to transfer your chats between different platforms natively!
It’s under development and it will likely be released when multi device is out.https://t.co/kUOmKTrUIX

The development of the feature takes a long time because it will totally change the experience on WhatsApp, and a lot of things have been rewritten in order to be compatible with multi-device.

WhatsApp says that apps that claim to move your chat history between phones violate their Terms of Service.https://t.co/MK4tJmBGrc pic.twitter.com/Vz423jIVuv

The feature will also allow WhatsApp Web (including Portal) to be used without an internet connection on the device, at first. In a future update, WhatsApp will allow linking other iOS and Android mobile devices.

It was learnt that the future update for iOS and Android will bring the solution of this issue as well as it will enable the possibility to migrate your chat history. The website also provided a screenshot of the possible update which showed the option of WhatsApp chat migration to Andriod from iOS. 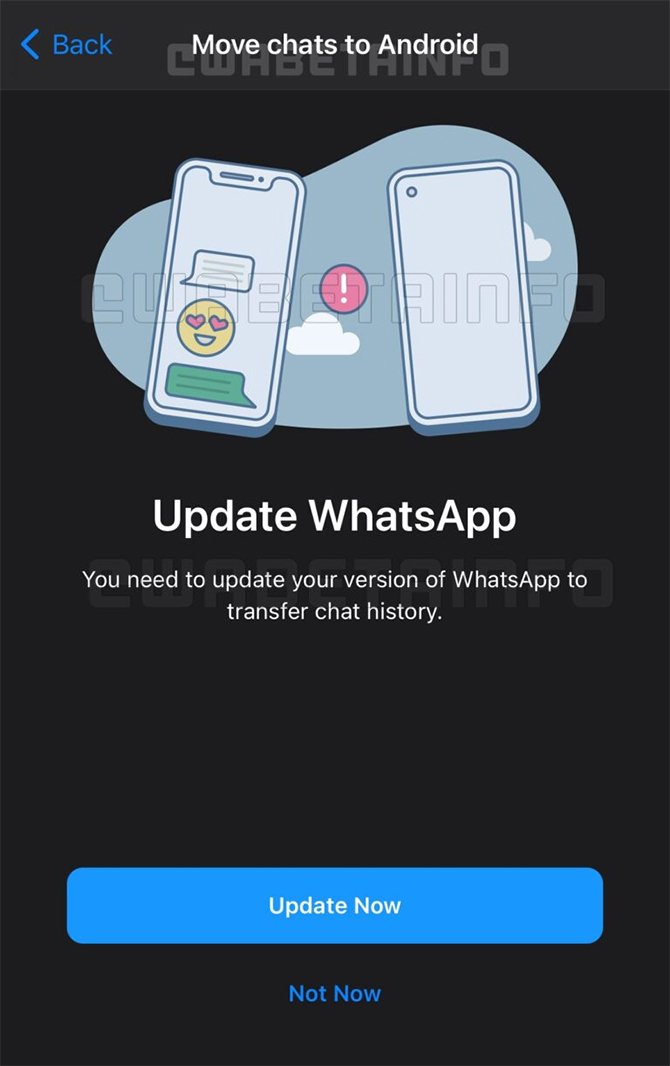 The post read that it is obvious that WhatsApp will also allow the opposite way.

When the user tries to link a device having a different operating system to his WhatsApp account, it’s always needed to update to the latest WhatsApp update available on the App Store or TestFlight, in order to avoid any compatibility error with the Android version.

However, the release date of the feature was not available yet.

Although, there are some tools around the web that might allow the chat history migration but they are not really recommended and, as for modified WhatsApp versions, they aren’t allowed because they violate the messaging app’s Terms of Service.