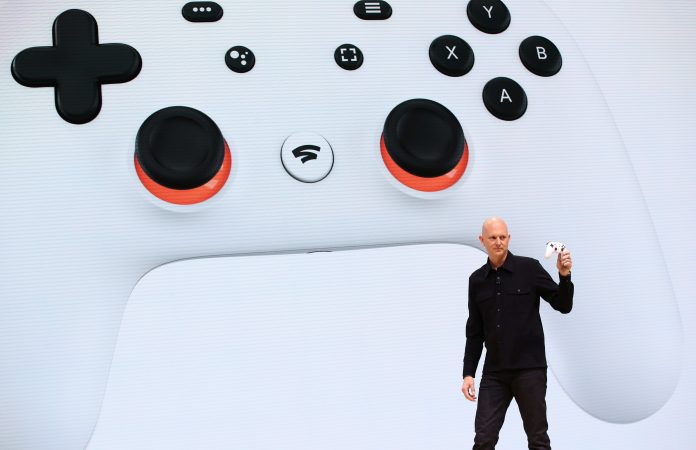 The gaming industry is a natural to promote social distancing during the coronavirus pandemic. Video game and technology companies are, in fact, working directly with the World Health Organization on a campaign to keep people apart. And technology giants that are relatively new to the video game business, Facebook and Google, are making moves that show it may be wise for them to use this opportunity with so many people at home to grab more share of the gaming market.

Facebook Gaming released a new feature this week that allows users to create tournaments with friends and the general public, playing each other — from home — in games like “Fortnite” and Activision Blizzard‘s “Call of Duty: Warzone.”

Originally created for esports gaming, the feature, which works similar to creating an event on Facebook, lets users design tournaments that update brackets and leaderboards and raise money for charitable causes, like COVID-19 relief.

The idea is good for Facebook and its consumers, according to Laurel Walzak, a professor at Ryerson University who specializes in gaming. “Facebook is providing their audience with an opportunity to engage with each other,” while the social media giant is also creating “more loyalty to the brand.”

“If gaming companies are going to provide people with free trials, they are going to integrate them into these services, which helps them build relationships with customers,” Walzak said. “Not just people who are interested in it. But people who are looking for different forms of entertainment to participate in.”

Amazon, which owns Twitch, the most popular site for the livestreaming of gamers, is offering Amazon Prime subscribers and Twitch users five free games that are collectively worth more than $100, until May 1. The games include “Turok,” a remastered version of the 1990s shooting game, and “Earthlock,” an indie role-playing game. Twitch has seen its usage surge during the coronavirus and as stay-at-home orders around the U.S. have increased.

“It is an opportunity for gaming companies to put their brands in front of more people,” said media and streaming analyst Dan Rayburn. “The idea that they are giving away services, so consumers can see what these are like, hopefully will lead to a conversion in new subscribers or customers.”

Verizon has reported huge increases in gaming usage, as high as 75%, since the start of the coronavirus outbreak in the U.S.

In Italy a major telecom company reported a struggle to keep up with a 70% spike on its network and cited Fortnite playing as a primary cause.

It is not just the tech giants seizing the opportunity among the unprecedented lockdown of Americans. Old media is reaping big gains as well, with Disney reporting on Wednesday its new streaming service Disney + is above 50 million subscribers.

Traditional video game companies are seeking to capture greater share of the gaming market with new offers during the pandemic.

Ubisoft, for example, was offering free downloads of its PC game “Rayman Legends” at the end of March, which traditionally sells for $19.99. Take-Two Interactive‘s Rockstar Games announced in late March that it would donate 5% of its online revenue from its Grand Theft Auto and Red Dead Redemption franchises to local communities and businesses that have been impacted by the coronavirus outbreak.

And sports gaming companies, like 2K Games (also owned by Take-Two Interactive), which produces the popular NBA 2K franchise, and Electronic Arts, which makes the Madden football game, have teamed up with Disney’s ESPN, and Fox Sports, to create televised tournaments that feature popular athletes, like Brooklyn Nets player Kevin Durant, and former pro bowl quarterback Michael Vick — the winnings of these tournaments are going to COVID-19 charities.

The WHO and gamers

The World Health Organization has teamed up with several big companies in the gaming market, promoting a campaign titled “Play Apart Together.” Backed by Activision Blizzard, Amazon’s Twitch, Riot Games, Alphabet’s YouTube Gaming and other big players, like Microsoft and Sega, the campaign encourages gamers to practice social distancing at home by offering free special events, exclusives, and rewards for beloved games.

The gaming industry is one of the few that has performed well in the market during the pandemic. Gaming-themed exchange-traded funds are outperforming broad stock indices.

And games are still selling worldwide.

The newest installment in Nintendo’s Animal Crossing franchise, titled “New Horizon,” sold 1.8 million copies during its first three days of availability in Japan after being released March 20. And the coveted war game “Call of Duty: Warzone,” which launched on March 10, accumulated 30 million players in 10 days. In some places, physical sales were being made and customers lining up, despite public recommendations for social distancing.

Gamers line up for a copy of Animal Crossing video game outside an EB Games store on Yonge St., in downtown Toronto despite requests to self-distance and stay home.

“Gaming in general is fairly recession-proof,” said Daniel Ahmad, a senior analyst at Niko Partners, who also expects the pandemic to give 2020 revenue sales an added boost. “More people engaging in gaming over the year boosts the bottom line.”

But that does not mean that the gaming sector lacks coronavirus challenges.

Ahmad said one of the biggest short-term challenges that the industry must face is continued production, especially as content developers are stuck working at home — and limited by their remote resources.

“We are already starting to see delays to major game releases,” Ahmad said.

Sony Interactive Entertainment announced last week that “The Last of Us: Part Two” and Marvel’s Iron Man VR games have been delayed until further notice. Other delays include the portable version of “The Outer Worlds” for Nintendo Switch (now slated for June) and Microsoft-owned “Minecraft Dungeons.”

“The audiences are used to certain kinds of content,” Walzak said. Companies need to be creative and ensure that whatever technology is being used is up to standards that gamers have come to expect, she said.

Rayburn said in addition to meeting the high standards of core gamers, recent subscriptions and customer acquisitions are not a sure thing to last well beyond the end of social distancing. Especially with summer coming around, “people are going to want to go out, see their friends, and go to live events,” he said.

Holding on to gaming subscriptions may not make sense when free trials conclude, especially as disposable income in the U.S. declines for many workers amid job losses, furloughs, salary and bonus reductions and, generally, more financial stress.

Rayburn thinks any shifts in market share that are durable won’t be known for at least a quarter or two when the economic situation may start to normalize.

“We don’t know if people are purchasing these services for just a limited time,” Rayburn said. “Everyone wants to debate,” he said, but the conversation will ultimately be about how many new subscribers or customers these companies get, and keep.

In mid-February, B&H Photo briefly put up Google’s forthcoming Pixel Buds 2 for pre-order, and just a couple days ago, another listing for the headphones came from Chicago-based retailer Abt. The product was priced at $179, but no actual release date was provided. Now, buyers are being notified by Abt about a potential shipping date. According…
Read more

Hey I'm Jon, CTO at Sym, and I've been building support for AWS Session Manager into our access management products. We're finding that many people still don't know about the features of Session Manager and how it can help them simplify their infrastructure, …
Read more