Meet Turing’s Cadenza, there is no smartphone on earth like it

Imagine a smartphone with two Snapdragon 830 SoCs, 12GB of RAM, 12MP front cameras, and 60MP rear cameras. Yes! These are the specs of the forthcoming smartphone from the house of Turing which is popular for its hack proof smartphones.

While other manufacturers are trying to push the RAM boundaries to 6GB, Turing Cadenza will have exactly double that at 12GB of RAM.

Turing has been famous for its completely secure products and pushing the envelope further, Turing Robotics Industries (TRI) has announced its intention to release a smartphone with literally insane specs.

Turing’s new super smartphone will be released in 2017 and called the Turing Phone Cadenza. Cadenza has previously unheard and unbelievable specs. Imagine a smartphone in your hand with two Snapdragon 830 SoCs, 12GB of RAM, 12MP front cameras, and 60MP (yes, it is 60!) rear cameras.

And folks that’s not all. Turing’s smartphone’s rear camera is not something ordinary but an iMAX 6K Quad Rear Camera with Triplet Lens/T1.2. If the Cadenza becomes a reality and I am pretty sure it will, it will the first smartphone to capture 60MP photos and 6K videos. The matter of storage comes to

Wait, Turing is not done yet! With such heavy specs, there is a small matter of internal storage. If it was a normal smartphone, 128-256GB would have done the job but Cadenza being a Turing masterpiece will have 1TB of internal storage. Not that 1TB is less but Cadenza will also give you opportunity to add additional memory via two microSD card slots for that extra bit. 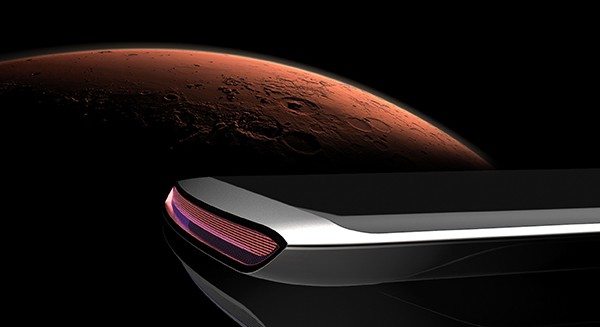 Turing is planning to do to smartphones what Jio has done to mobile telephony in India! Revolutionize it by disrupting it.

For connectivity, Turing’s Cadenza will have NanoSIM slots as well as WiGig.

And as you may have guessed by now, Android and iOS can’t power this super giant of a smartphone. So Turing is relying on Swordfish OS, which is capable of deep learning, running a neural network, using differential privacy and natural language processing. 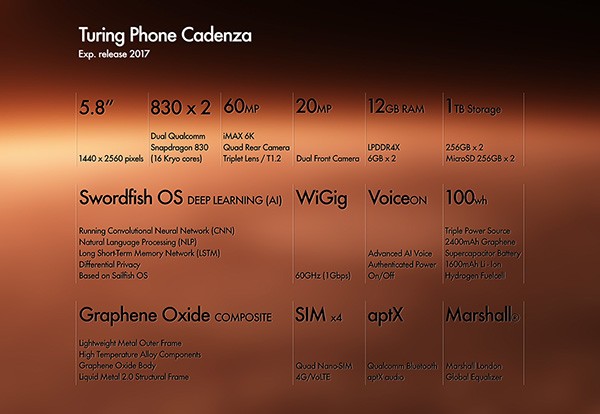 The reason why Turing intends to take the smartphone market to the next level is Outer Blueprint program, which aims to improve mobile communication with the use of artificial intelligence. The company calls the Turing Phone Cadenza a “perfectly designed device.”

The company calls the Turing Phone Cadenza a “perfectly designed device.” I call it a super smartphone! It would be great to see how much Turing’s marvel will cost us. With specs like these, rest assured Cadenza won’t come cheap but as they say, best things are always costly.