Home > Technology News > This shoe charges your smartphone while walking

Our shoes may become our next energy source. Thanks to a new energy harvesting and storage technology developed by the mechanical engineers at the University of Wisconsin-Madison. This technique can reduce reliance on batteries in mobile devices and charge your smartphone as you walk.

Tom Krupenkin, professor of mechanical engineering, and senior scientist J Ashley Taylor described the innovative energy-harvesting technology that can capture the power of human motion to charge mobile electronic devices such as smartphones and laptops. 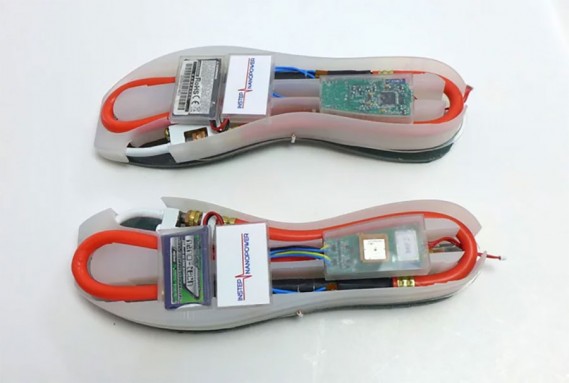 This could enable a footwear-embedded energy harvester that captures energy produced by humans during walking and stores it for later use.

Power-generating shoes could be especially useful for the military, as soldiers currently carry heavy batteries to power their radios, GPS units, and night-vision goggles in the field. The advance could also provide a source of power to people in remote areas and developing countries that lack adequate electrical power grids.

“Human walking carries a lot of energy. Theoretical estimates show that it can produce up to 10 watts per shoe and that energy is just wasted as heat. A total of 20 watts from walking is not a small thing, especially compared to the power requirements of the majority of modern mobile devices,” explained Krupenkin.

Krupenkin and his colleague J. Ashley Taylor believe that this technology could be a game-changer in the energy space that could power a wide range of devices from your phone to your tablet to just about anything that requires batteries for operation.

A typical smartphone requires less than two watts of energy.

“We have been developing new methods of directly converting mechanical motion into electrical energy that are appropriate for this type of application,” Krupenkin noted in a paper published in the journal Scientific Reports.

The team has been working to develop new method of converting mechanical energy into electrical energy that would work for generating power from a human walker. The process the team is working on now is known as reverse electrowetting. This technique uses a conductive liquid that works with a nanofilm-coated surface that is able to produce electricity.

Researchers developed a ‘bubbler’ method, which combines reverse electrowetting with bubble growth and collapse. A bubbler has no moving mechanical parts and uses a pair of flat plates with a conductive liquid between them. The tiny holes in the bottom plate allow pressurized gas to enter and form tiny bubbles. The bubbles grow until they are large enough to touch the top plate, which causes the bubble to collapse.

The speedy, repetitive growth and collapse of bubbles pushes the conductive fluid back and forth, generating electrical charge. This method produces around 10 watts per square meter of surface and in the space of a shoe; the team believes that making 10 KW of power might be possible.

The findings were published in the journal Scientific Reports.

The engineers are looking for industry to commercialise the technology through their startup company, InStep NanoPower.