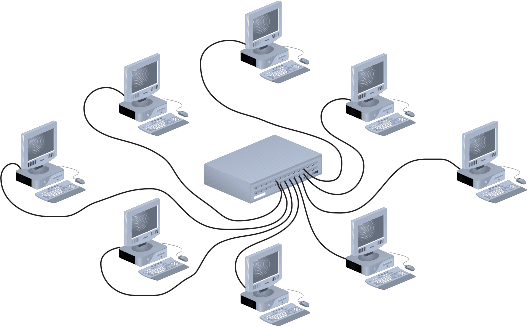 Short Bytes: Star Topology is the most commonly used network topology. Well, it has got some advantages/disadvantages

What is Star Topology?

A star topology is a network topology in which all the network nodes are individually connected to a central switch, hub or computer which acts as a central point of communication to pass on the messages.

In a star topology, there are different nodes called hosts and there is a central point of communication called server or hub. Each host or computer is individually connected to the central hub. We can also term the server as the root and peripheral hosts as the leaves.

In this topology, if nodes want to communicate with a central node, then they pass on the message to the central server and the central server forwards their messages to the different nodes. Thus, they form a topology like the representation of a star.

How does communication happen in a Star topology?

Let’s say all the computers of a floor are connected to a common hub or switch. The switch maintains a CAM table in this case. The CAM table is Content Addressable Memory where hardware addresses of the all the connected devices are stored inside a memory in the switch.

In the case of a hub, a hub has no memory of its own. So when computer A sends a message to computer B, then hub announces “Hello all the ports connected to me, I have got a packet for this address. Who of you has this address?” This procedure is called ARP (Address Resolution Protocol) and using this network protocol the hub is able to find the address of the intended machine and hence, it transfers the packet to the destination machine.

MUST READ  WHAT IS CARDING?

ShortBytes: FossBytes brings you a list of the Best data recovery software of 2016 which are totally free. These data recovery tool save a...
Read more

On the shoulders of the giants

My journey in the world of software has been quite brief. I joined the industry roughly three years ago, as a not-yet-graduated mathematician converted to ML practioner. It took me another two years to find myself in a position where building software was my…
Read more

The Man Who Saw the Pandemic Coming

Dennis Carroll doesnt mean to sound callous when he says the coronavirus outbreak was predictable. And he doesnt. He sounds sympathetic to people frightened by the outbreak. He has been an eyewitness to people around the world suffering from similar viruses. …
Read more